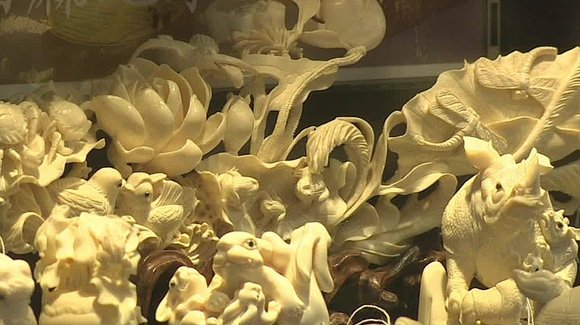 The import and export of ivory across international borders is banned

It's not an unusual sight in some of Hong Kong's busiest shopping districts. Step inside a store and you can purchase anything from expensive, ornately-carved sculptures, to ivory toothpicks costing the equivalent of US$11. And it's all legal.

Hong Kong has 413 licensed ivory sellers, permitted to deal in material dating before 1989, when a treaty banned the international ivory trade. Ivory cannot be imported or exported, so purchases must stay inside Hong Kong. But a year-long investigation by the conservation group WildAid concluded that some Hong Kong traders appear to be using the legal trade as a cover.

Several hours of undercover video obtained by WildAid and shared with CNN appear to show ivory traders boasting about just how easy it is to break the rules.

"I can buy smuggled ivory any time, but do you dare to receive them?" says one trader caught on camera. "If you dare, then I will send them. I will send them to you from Africa," he continues.

Africa is struggling with an epidemic of illegal ivory poaching. Hunters kill tens of thousands of wild elephants every year for their tusks. Activists warn that at the current rate of killing, the wild African elephant could be extinct within a generation.

Much of the demand is coming from mainland China, where ivory is still seen by some consumers as a luxury item that connotes wealth.

In a speech to be broadcast on Chinese state television, Britain's Prince William makes a plea to the Chinese public to stop buying ivory products and those made from other endangered species.

"Let us not tell our children the sad tale of how we watched as the last elephants, rhinos and tigers died out, but the inspiring story of how we turned the tide and preserved them for all humanity," he says.

Hong Kong's traders are only required to register their ivory holdings annually by weight; the government does not provided licenses by piece.

In the undercover video, one trader explains just how easy it is to exploit this system. When he sells one item, he claims he only needs to substitute a new one made from illegal material.

"The government has no idea how to regulate this," he says, though he insists all his stock is legal.

The import and export of ivory across international borders is banned. But the domestic sale of pre-1989 ivory is legal.

However, wildlife activists question whether there is enough domestic demand in Hong Kong to support hundreds of ivory traders.

They point to a recent survey by Hong Kong University, in which 91% of respondents said they did not own an ivory product. That fact has one Hong Kong legislator asking who her city's ivory traders are really targeting.

"When we go to the shops we see advertisements written in English, Spanish, simplified Chinese. They target customers who are tourists," said local lawmaker Elizabeth Quat.

"If we understand the law, tourists who buy ivory in Hong Kong cannot take [it] out of Hong Kong," Quat added. "That means they smuggle."

In the hidden camera footage released by WildAid, an unidentified ivory trader offers to hand money back if he cannot successfully deliver a shipment of "African horns" across the border to China. African horns refers to those of the rhino, another endangered species that is illegal to trade.

"If the horn gets seized by customs, I will return the money to the supplier," he says. "If you want to get your hands on this, start from 100 kilograms. Don't smuggle too much."

At a summit in the U.S. last month, President Barack Obama and his Chinese counterpart Xi Jinping announced plans to stop the import of ivory as hunting trophies. They also pledged to take "significant and timely steps" to halt the domestic commercial trade of ivory.

In an email to CNN, the Hong Kong government defended its actions at combating the illegal trade of ivory.

"Vigorous enforcement action is maintained and smugglings of ivory have been detected at various control points," wrote the Agriculture, Fisheries and Conservation Department, or AFCD.

The department said authorities intercepted 16.7 tons of illegal ivory over the last three years. It also announced plans to conduct a "comprehensive stock check" of all licensed ivory, along with surprise inspections of shops and the introduction of "tamper-proof holograms" and photographic records to better track pre-1989 ivory.

But Quat is lobbying the Hong Kong government to go one step further.

Despite mounting pressure, Quat predicts it would take at least a year before a draft of a domestic ivory ban could be submitted before Hong Kong's legislative council.

That is precious time for Africa's dwindling elephant population.