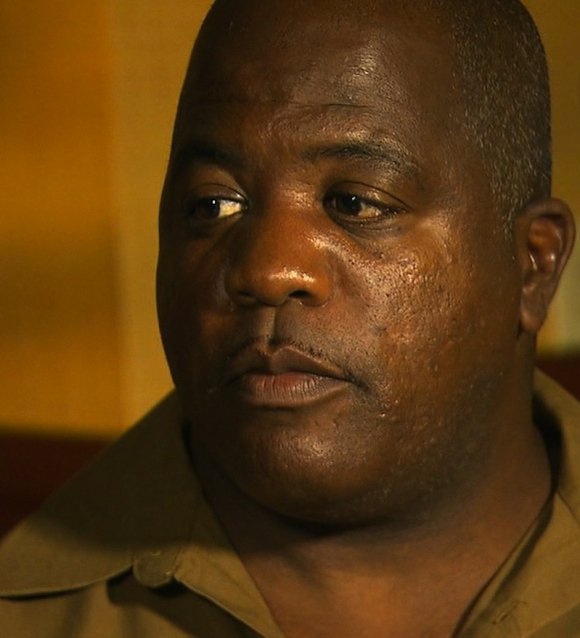 For the local sheriff's department, the death of 17-year-old Kendrick Johnson is a closed book: A tragedy, but an accident. State medical examiners concluded that Johnson suffocated in January, 2013, after getting stuck in a rolled-up gym mat while reaching for a sneaker. That's a finding his mother and father Kenneth Johnson (shown) has never accepted, and one challenged by the findings of a second autopsy they commissioned.

(CNN) -- It's been almost three years since Kendrick Johnson was found dead in a rolled up gym mat at his high school. The Georgia teen's death has attracted headlines and scrutiny ever since officials ruled his death accidental. His parents, never believing this finding, filed a $100 million civil suit which this week took yet another turn. The Department of Justice has asked a judge in Lowndes County to block the attorneys from collecting evidence in that civil suit.

According to court documents, the Justice Department is asking the judge to 'temporarily stay discovery in the case for 180 days' pending the federal criminal investigation. If granted, the stay would prevent attorneys for Johnsons' parents, Kenneth and Jacquelyn Johnson, and attorneys representing the dozens of defendants named in the case from deposing witnesses and collecting other evidence for that six-month period.

Assistant U.S. Attorney J. Thomas Clarkson included five exhibits to support the requests, including a six-page affidavit from Nelson Rhone, a criminal investigator who works in the office of U.S. Attorney for the District of Columbia Deborah Sines. Sines joined the investigation in 2014. Nearly all of the copy of Rhone's affidavit that was provided to CNN has been redacted.

In the filings, Clarkson noted that Chevene King, the Johnsons' attorney, issued a notice to depose FBI Special Agent Rick Bell. Bell is the father of Brian Bell and Branden Bell, former schoolmates of Johnson. All three Bell's are named as defendants in the civil case. According to the Bell family's attorney, Brice Ladson, the three received letters in 2014 indicating they are also the targets of the Justice Department's federal criminal investigation.

Clarkson determined in his request to intervene in this case, "it became necessary for the United States to intervene."

In the lead-up to the Justice Department's filing, the parties argued over when and how to conduct depositions and none have been conducted.

On October 16, Lowndes County Court issued a subpoena on behalf of the Bell family's attorney to the Atlanta offices of Twitter for information that would reveal names and locations of account holders connected to 23 Twitter handles. The subpoena also requested all tweets dating back to January 11, 2013 -- the day Johnson's body was found.

In the January 2015 civil lawsuit the Johnsons claimed Kendrick Johnson was "induced" by a female student to go to the old gym at Lowndes High School on January 10, 2013. The female student was not named in the suit.

King claim the two Bell brothers "violently assaulted" Johnson at their father's command and that Johnson "suffered a fatal injury which led to his death." Initially, the suit also named more than 30 other defendants, mostly members of local law enforcement, plus the City of Valdosta.