Taste of the Texans Presented By Sysco Set for Monday, November 2 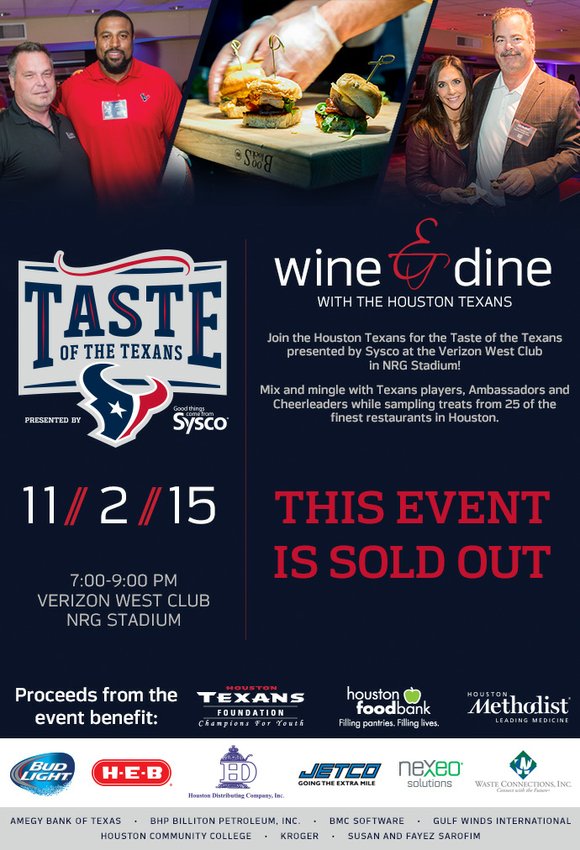 HOUSTON – Houston Texans fans will have the opportunity to wine and dine with Texans players, Lady Texans, the Houston Texans Cheerleaders, TORO and Texans Ambassadors at the seventh-annual Taste of the Texans presented by Sysco on Monday night, Nov. 2, at NRG Stadium. The event begins at 7 p.m. CST in the Verizon West Club.

The entire Texans rookie class, including Kevin Johnson, Christian Covington and Jaelen Strong, along with several other veteran Texans players will be in attendance.

More than 25 of the top restaurants in Houston will be on hand to serve some of their signature dishes, including Del Frisco’s, RDG + Bar Annie, Killen’s, Taste of Texas, Underbelly and North Italia.

Proceeds from the event will allow the Houston Texans Foundation to help underwrite hunger-relief programs of the Houston Food Bank, the largest source of food for hunger relief charities in 18 southeast Texas counties, and support patient care, education and research programs at Houston Methodist.

What: Seventh-annual Taste of the Texans presented by Sysco