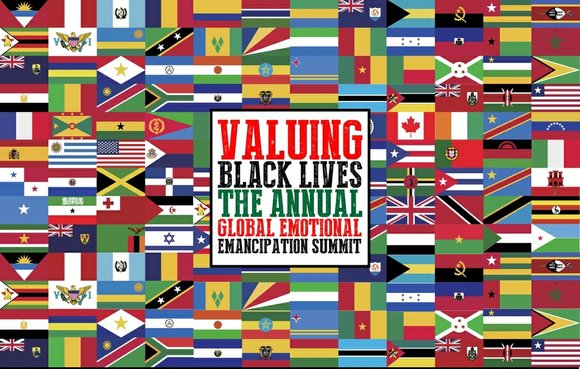 (BLACK PR WIRE) - An Afro-European delegation, the leader of the Caribbean reparations movement, Black Lives Matter activists, and members of the Pan African Congress and the African Union will highlight Valuing Black Lives: The First Annual Global Emotional Emancipation Summit to be presented by Community Healing Network (CHN) and the Association of Black Psychologists (ABPsi) on September 17 and 18, 2015.

The Honorable Karen Bass (D-Ca.), Ranking Member of the U.S. House of Representatives Africa Subcommittee, is hosting the Summit as part of the 45th Annual Legislative Conference of the Congressional Black Caucus Foundation in Washington D.C., at the Walter Washington Convention Center, 12 Noon to 5 PM, September 17, and 9 AM to 5 PM, September 18.

The urgent gathering is bringing together leaders of African ancestry from around the world to counter the attack on Black lives by developing concrete action plans to address the root causes of the attack: the lies of White superiority and Black inferiority. The 2015 Summit theme is “Taking Control of Our Destiny: Confronting the Deadly Mindset at the Root of the Devaluing of Black Lives.” The Summit will launch a global conversation about the lies and their origins and effects, devise strategies for dismantling them, and establish international working groups for continuing collaborative action.

Rep. Bass said, "This is a ground-breaking and much-needed Summit that goes to the heart of the challenges faced by people of African ancestry all over the world. I am delighted to host it, and I look forward to working with the Summit leaders to help implement the action plans that will be developed."

The Valuing Black Lives Summit is part of a multi-faceted set of strategies devised by CHN, which has been working since 2006 to build a global grassroots movement for emotional emancipation--to help Black people overcome, heal from, and overturn the lies of White superiority and Black inferiority. In 2011, CHN forged a collaboration with ABPsi to develop self-help support groups called Emotional Emancipation (EE) Circles, and together, CHN and ABPsi have trained over 250 local EE Circle leaders and planted seeds for EE Circle groups in 15 cities in the United States (including Ferguson, New York City, Baltimore, and New Orleans), as well as in the United Kingdom, Ghana, and Cuba.

“Black people around the world are under siege,” said Enola Aird, founder and president of CHN, creator of the Summit, “and in this, the United Nations-designated International Decade for People of African Descent, we must develop a unified global response to address the root causes of the countless injustices against people of African ancestry.”

Sir Hilary Beckles said, "I am honored to participate in this Summit and I commend the organizers for focusing on the root causes of anti-black racism around the world and on the institutional and systemic structures of white supremacy. Now is the time for an honest and open public discourse on the social, economic, and psychological legacies of racism, slavery, colonialism and segregation. The time has come to repair the damage and heal the historical wounds that have been inflicted on people of African ancestry across the globe."

ABPsi Past President Dr. Cheryl Tawede Grills said, “These lies contribute to all of the challenges facing Black people throughout the world, and any strategy (educational, economic, health, political, etc.) aimed at improving conditions for Black people must address them.”

Among the Summit supporters are: The Pan African Movement for Justice; The European Network Against Racism; The Caribbean Alliance of National Psychological Associations; The Institute for the Black World Black Family Summit; and The National Association of Black Social Workers.

Momodou Jallow, Vice-Chair of ENAR, said: "Devaluation of Black Lives and Afrophobia have always been and continue to be a global problem. We need to build partnerships, to learn from our diverse experiences and to support each other's struggles, working closely with allies who share our vision and commitment to a transformative socio-economic and political justice movement beyond borders. This has never been more urgent."

Dr. Taasogle Daryl Rowe, Immediate Past President of ABPsi, said “The aims of the Summit are to re-ignite a movement to restore human agency and dignity to people of African ancestry. This movement warrants maximum vigilance, resolve, commitment and focused action to bring an end to the disregard for Black lives and dignity.”

CHN’s aim is to engage a critical mass of Black people in the movement for emotional emancipation by the year 2019, the 400th anniversary of the forced arrival of Africans at Jamestown colony in the United States, so that, by 2020, Black people will begin to see themselves in a whole new light.

“Because,” said Aird, “four hundred years of dehumanization are enough.”