All-New Season of "Oprah: Where Are They Now?" To Premiere Saturday, September 19 at 10:00pm ET/PT on OWN 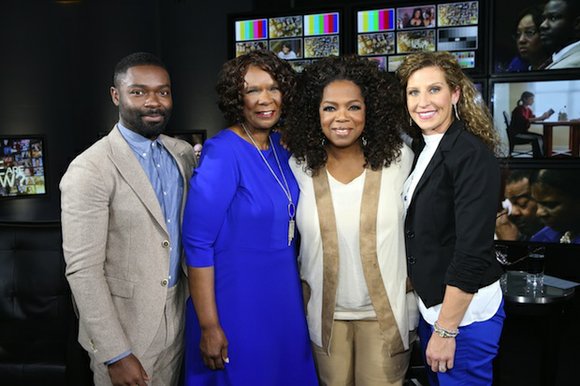 Los Angeles – OWN: Oprah Winfrey Network will premiere an all-new season of “Oprah: Where Are They Now?” Saturday, September 19 at 10:00 p.m. ET/PT with award-winning actor David Oyelowo (“Selma”) and former “Oprah” show guest Ashley Smith, who was held hostage by courthouse shooter Brian Nichols 10 years ago, and whose miraculous story of survival will be featured in upcoming feature film, “Captive,” in theaters on September 18.

Their stories made headlines across America. Now, rediscover Oprah Show guests who made you laugh and cry, and see what has happened to some of the biggest newsmakers of all time. Upcoming episodes feature David Oyelowo and the real-life story behind his new movie. Plus, catch up with Danny Pintauro, the child star of Who's The Boss?, actresses Debi Mazar and Lisa Rinna, singer Amy Grant and many more. Watch the season premiere on Saturday, September 19, at 10/9c. More from Oprah: Where Are They Now? Read more: http://www.oprah.com/own-where-are-they-now/Oprah-Where-Are-They-Now-Returns-This-Fall-Video#ixzz3kcOzSEiM

Oyelowo plays Nichols in the new dramatic thriller, a man responsible for launching one of the most notorious manhunts in America after killing four people during his escape from an Atlanta courthouse. Nichols later forced his way into Smith’s apartment, holding her hostage for seven hours. During her 2005 visit to the “Oprah” show, Smith shares how turning to Rick Warren’s inspirational book, “The Purpose Driven Life,” not only helped her find purpose in her own life, but ultimately helped Nichols find a more peaceful resolution to a harrowing situation that fateful day. During the episode, Smith also comes face to face with Nichol’s mother, Claritha Nichols, for the first time.

Oprah Winfrey goes one-on-one with “All My Children” star Debbi Morgan to talk about the long history of domestic violence in her family. Updates include “Good Morning America’s” Amy Robach and her husband, actor and entrepreneur Andrew Shue, plus the unforgettable mom who nearly shopped her family broke.

A special episode of “Oprah: Where Are They Now?” will spotlight spiritual “Oprah” show moments and guests in support of the OWN television event “Belief,” a week-long documentary series airing over seven consecutive nights that depicts how people with a wide range of beliefs search for deeper meaning and connection with the world around them.

“Oprah: Where Are They Now?” is produced by Harpo Studios. Executive produced by Jill Van Lokeren, Julie Simpson and Veronica Votypka.

For more information on "Oprah: Where Are They Now?" visit:

To join the conversation on social, use #WhereAreTheyNow @OWNtv

ABOUT OWN: OPRAH WINFREY NETWORK:

OWN: Oprah Winfrey Network is the first and only network named for, and inspired by, a single iconic leader. Oprah Winfrey's heart and creative instincts inform the brand - and the magnetism of the channel. Winfrey provides leadership in programming and attracts superstar talent to join her in primetime, building a global community of like- minded viewers and leading that community to connect on social media and beyond. OWN is a singular destination on cable. Depth with edge. Heart. Star power. Connection. And endless possibilities. OWN is a joint venture between Harpo, Inc. and Discovery Communications. The network debuted on January 1, 2011 and is available in 85 million homes. The venture also includes the award-winning digital platform Oprah.com.