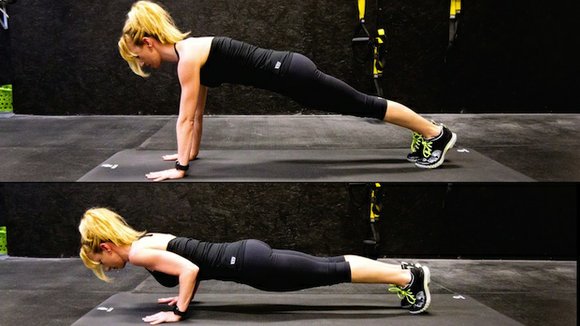 Push up -- This pushing movement promotes strength in the arms, shoulder girdle, back and core. Make it a goal to perform 5 to 10 unmodified pushups with perfect form.

(CNN) -- Look at the fitness section of any magazine rack and you'll find men's publications splashed with words like "get more" and "gain" and "build," while women's magazines feature directives like "fix" and "slim" and "lose" and "tone." Notice the difference?

My interpretation is that, if I don't look like the ultra-thin or impossibly curvy Photoshopped cover model, I am somehow broken, overweight or flabby -- requiring "fixing." This may seem extreme, but countless studies point to the media's impact on body image for women.

In 2008, researchers from the University of Wisconsin-Madison and University of Michigan analyzed 77 previous studies. They found that exposure to this type of media significantly increases women's dissatisfaction with their bodies and their likelihood of developing unhealthy behaviors, like eating disorders.

Thankfully, increasing awareness of the media's influence on women has prompted positive campaigns like Always' #LikeAGirl. The success of female athletes like Ronda Rousey and Serena Williams is helping project another view of health and beauty, driven by athletic performance rather than aesthetic goals.

Boston-based strength and conditioning coach Tony Gentilcore, who works with clients of both sexes, from pro-athletes to stay-at-home parents, is a big proponent of shifting women's fitness motivation away from appearance. "Rather than having my female clients focus on media-fed goals like losing 10 pounds or wearing a sleeveless dress, I try to get them to buy into more of the performance side of things, particularly from a strength-training perspective," he says.

Gentilcore wants women to aspire to strength goals because feeling stronger in your body promotes a stronger body image. And, by increasing muscle mass, they are increasing their metabolic rate, which results in more calories burned throughout the day -- not just during the exercise, as is the case with cardio.

"Those appearance goals they've been trying so hard to achieve ... happen, despite the fact that they weren't the focus," Gentilcore says.

Over the past decade, numerous studies have backed up the correlation between strength training and enhanced body image among women of all ages, from college to post menopause. Yet many are still averse to lifting weights due to the perception it will make them "bulky," even though women don't naturally produce enough testosterone to build voluminous, masculine muscles.

The misconception is fueled by depictions of women holding 5-pound, pink dumb bells while touting the latest regimen of high repetitions with low weight for a "feminine figure." But shouldn't a "feminine figure" be functional in the broader spectrum of women's lives, which might including carrying heavy weight as part of their careers or recreation, or simply lugging kids and groceries?

Gentilcore thinks so, which is why he believes there are four primary strength-training moves every woman should aspire to do, if they want to feel better in their bodies and stronger in their lives. We've outlined the rationale and instructions for the moves below. These are all exercises I've included in my own strength and conditioning program for years because they work your whole body through primary functional movements: pulling, pushing, hinging and squatting.