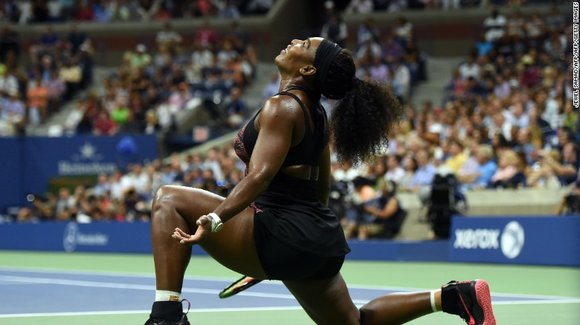 Perhaps the most astounding statistic of all is the gap between Serena and World No. 2 Simona Halep in WTA point totals: Serena's tally of 12,721 is more than double Halep's 6,130. This, despite Serena playing two less tour matches over the past 52 weeks, not to mention the 10 more years of wear and tear on the courts over the 23-year-old Romanian.

As professionals, the sisters first met in a grand slam -- the second round of the 1998 Australian Open, with Venus winning in straight sets. Serena now holds a 16 -11 edge over Venus in overall competition.

But that hardly means playing Venus is a stress-free affair for the six-time U.S. Open champion.

"The only player in the draw I don't want to play, not only because she's my sister, but for me she's the best player," the 33-year-old Serena said of Venus, a former No. 1 herself who is now ranked No. 23 in the world.

"She has beaten me so many times," added Serena, who has now defeated her sister 16 times in their previous 27 meetings, including nine of their previous grand slam encounters and three out of five U.S. Open battles.

Serena's imposing game, force of will, and hunger have made the American especially difficult to stop at tennis' four major tournaments, with the 33-year old having a winning percentage of close to 90% in the grand slams.

"When she is in those events is where she really turns it on," former world No. 4 Samantha Stosur told CNN.

Williams has, in fact, walked away from a major 39 times without hoisting the trophy but those defeats have been spread over 17 years and it hasn't happened since Wimbledon in 2014, when Alize Cornet shocked her in the third round.

If Serena reaches and wins Saturday's final, it will be her 22nd slam singles title, matching Graf's Open Era record and will leave the American just two shy of Margaret Court's all-time mark.

Prior to Tuesday's match, the two sisters most recently met at Wimbledon in July, where Serena claimed a comfortable win before going on to lift the title for the sixth time. The highly superstitious Serena could view her repeat victory over Venus as a positive sign.

Cilic through to semi-finals

Over in the men's draw, defending champion Marin Cilic of Croatia is through to the semi-finals after an arduous victory over crowd favorite Jo-Wilfred Tsonga. The Frenchman battled back from two sets down and staved off four match points before succumbing in five sets, 6-4, 6-4, 3-6, 6-7 (3), 6-4. Cilic called the victory "a huge mental fight."

World No. 1 Novak Djokovic will take on Spaniard Feliciano López in the late match at Arthur Ashe Stadium.

Should Djokovic advance, No. 9 seed Cilic will have his work cut out for him. The Croatian champion holds a 13-0 career record against Cilic, including a recent straight sets effort during the Wimbledon quarterfinals.