Serena Williams Falls Victim To The "Drake Curse" In The U.S. Open Semis 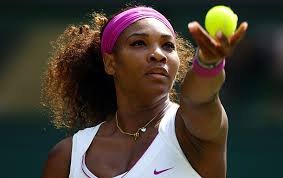 The tennis world has been left in shock as Serena Williams has been defeated by unseeded Italian Roberta Vinci, thus ending her hopes of becoming the first woman to win all four Grand Slams in a calendar year in 27 years. To make things even more tragic, Drake was in attendance, seated in Serena's players' box for the first time since the U.S. Open began. Did Williams buckle under the watchful eye of her new man who can't remember what an "L" looks like?

Vinci defeated Williams 2-6, 6-4, 6-4 to move on to the U.S. Open Finals, where she'll face fellow Italian Flavia Pennetta. Drake was caught on camera a few times supporting his woman through to defeat. The commentators also caught Drake on camera, and he had to crack a smile as he was tuned in on his headset. Some are saying that, though Drake has been winning in the rap game, he hasn't been so lucky with his sports fandom. Did Serena fall victim to the Drake curse?