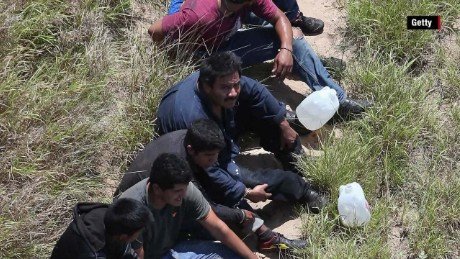 An increase in the number of such crossings in August is unusual because it is a time of year when the number of undocumented immigrants attempting to cross tends to drop because of the danger from hot temperatures.

The agency said it more than 4,600 unaccompanied children and more than 5,000 adults with children were apprehended at the U.S.-Mexico border.

The agency said that despite the August increase, the number of unaccompanied children apprehended crossing the border remains lower than 2014 highs.

Obama administration officials are planning later today to brief members of Congress when they've finalized the numbers from border sectors, according to U.S. officials.

Most of the immigrants in the 2014 surge came from Central American countries suffering from high rates of gang violence and poverty.

The number of such immigrants declined after U.S. officials mounted a public campaign warning of the dangers of migrating across thousands of miles, and began sending back some immigrants to their home countries. U.S. officials are still housing many of those refugees, whose arrival in 2014 came as a surprise to Homeland Security officials.

Until now, the 2015 numbers were trending down.

Some U.S. officials believe widespread news coverage of the refugee crisis in Europe, with thousands fleeing Syrian and other wars, may be influencing the new spike in immigrants seeking to come to the U.S. These officials suspect more could be encouraged to make the dangerous journey after U.S. officials in the past month announced plans to accept more refugees.