“Hoops to Hippos! True Stories of a Basketball Star on Safari! By Boris Diaw with Kitson Jazynka 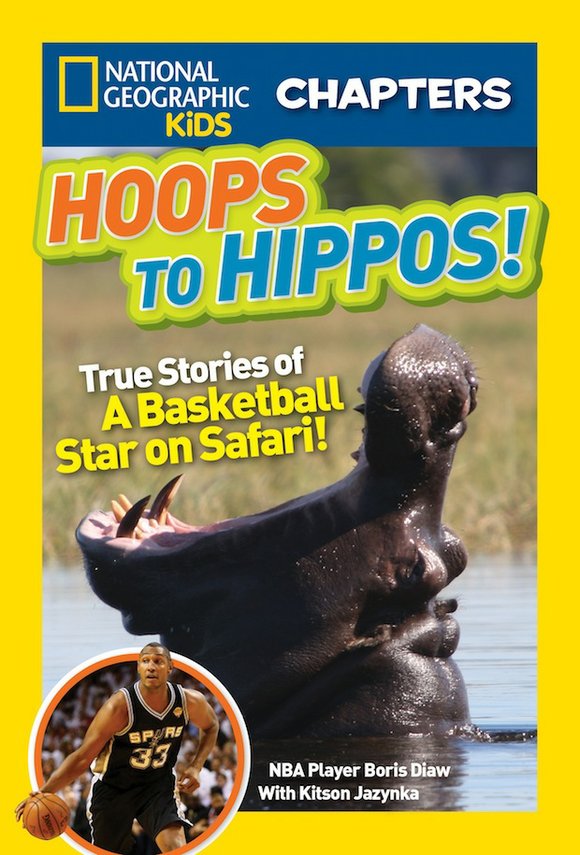 Bacon and eggs. Rock & roll, Mario & Luigi, whip & nae nae, Batman & Robin. Some things just naturally go together; they belong in pairs. And for NBA player and author Boris Diaw, there are two things he likes to add together. Read “Hoops to Hippos” (with Kitson Jazynka), and see what they are.

A long time ago, when Boris Diaw was a little boy growing up in Bordeaux, France, his mother took him and his brother to Senegal to visit the boys’ father. Neither Boris nor his brother, Marcus, had ever been to Africa and they were excited! Boris wanted more than anything to see wild animals in Africa; he bought a camera while he was traveling, and he hoped to take lots of pictures.

On that trip, he saw zebras and giraffes, monkeys, hippos, birds, and warthogs. He never saw lions or tigers then – but he wasn’t done traveling! He still wanted to see the Big Cats but first, Diaw grew up to become a professional basketball player in France, then he moved to the U.S. to play for the San Antonio Spurs. After his rookie year in Texas, he returned to Senegal again, to catch wild animals with his camera.

Diaw snapped pictures of hyenas and chameleons. He saw a herd of elephants and “noticed a baby elephant standing in between the legs of his mom. He was so small!” Hiking in the bush, he saw impalas and he played a traditional African bush game. Diaw was also startled by a huge African buffalo.

On later trips to Africa, Diaw saw lions and rhinos, and he steered clear of hippos and crocodiles, both of which can run quite fast. He and his group were once stalked by a pack of hungry hyenas who wanted a piece of a basketball star! While in India, Diaw learned a lot about tigers before he saw a mother tiger and her cubs in the wild. And he noted how animals and basketball players have a lot in common: it’s safer, easier, and sometimes more fun to work together as a team.

In your child’s life, he’ll have many interests. One of them may become her career but in “Hoops to Hippos,” she’ll see that it’s possible to have many passions.

Though, obviously, basketball is a subject that author Boris Diaw (with Kitson Jazynka) loves, wildlife and photography really are the focus of this book. In it, Diaw explains what it takes to hunt animals with his camera and, among tales of spotting creatures in their natural habitats, he also shares with young readers the thrilling adventures he’s had on safari. Conservation-minded parents will be happy to know that Diaw also carefully explains why it’s important to protect those animals he seeks.

For young basketball fans and for 7-to-9-year-old animal lovers who are just starting to read chapter books, this one is a great pick-up. Filled with pictures, surprise, and fun, “Hoops to Hippos!” plus your child equals a very good match.