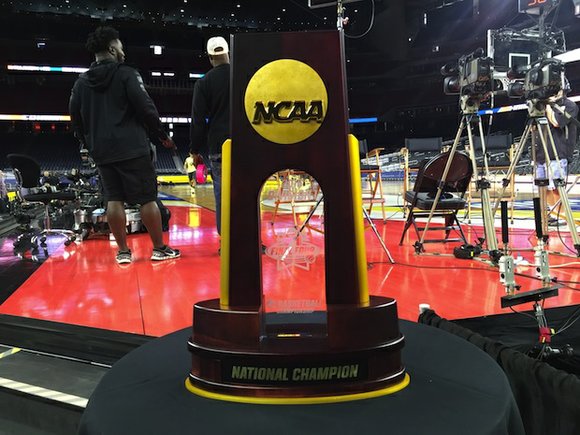 HOUSTON (CNN) -- This is unlike most sibling rivalries -- that's because these brothers weren't initially brothers.

But today, that's exactly what North Carolina junior guard Nate Britt and Villanova junior forward Kris Jenkins are. And on Monday night at NRG Stadium in Houston, the two will play against each other with a national championship on the line.

"It's not a movie script," Jenkins said. "It's amazing how it worked out, all the dedication and sacrifice, to have this opportunity. It's special to our family."

Jenkins says he first met Britt when he was 10.

Jenkins, the son of Felicia Jenkins and Kelvin Jenkins, was born in Columbia, South Carolina. He met Britt through basketball. After his birth parents separated, Jenkins, his mother and two sisters, Kaiya and Kelci, moved to Baltimore. Britt's dad, also named Nate, coached an AAU basketball team where Jenkins and Britt played together.

It was during this time that a series of events triggered an incredibly tough family decision.

According to ESPN, Felicia had a complicated pregnancy, and her daughter, Kori, died at the age of 11 months. It was then that Jenkins started spending more time with the Britts to help him focus on basketball as a method to cope. His bond with the family grew.

"My parents and his parents always stayed in contact," Jenkins said.

Jenkins' mother served in the Army, according to the ESPN story, and she liked the way Britt Sr. stressed discipline.

In 2005, Felicia Jenkins moved to South Carolina after she was hired to be the women's basketball coach at Division II Benedict College. Jenkins stayed with the Britts in Maryland.

When Felicia Jenkins found out that her son was getting into trouble at school, she made a decision that changed the lives of both families. She asked Melody and Nate Britt Sr. to become Jenkins' legal guardian. It became official in 2007.

Jenkins said he has no idea why his mother made that decision.

Jenkins says that he and Britt are competitive at everything, including running up the steps.

Despite being at different universities, they keep in touch as much as they can, but it's hard for one to watch the other's games because of their busy schedules.

So for Britt and Jenkins, this weekend has been a dream scenario.

On Saturday, Villanova dominated Oklahoma in the Final Four, winning 95-51. Jenkins had 18 points and eight rebounds. In the nightcap, UNC defeated Syracuse 83-66. Britt played nine minutes but didn't score. No matter; his team advanced to the national championship game.

Even better: Britt gets to play against his brother. Not only is a national title on the line, but so is permanent bragging rights for the rest of their lives.

"If we win on Monday, Kris will never hear me stop talking about the time we beat him in the national championship," Britt said Saturday night. "I will permanently have a one up on him."