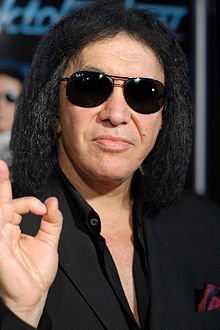 On Friday (Apr. 8), N.W.A. was inducted into the Rock & Roll Hall of Fame by Kendrick Lamar. After the group was presented with the honor by its Compton protégé, N.W.A. came up on stage to speak about being the first hip-hop act to ever enter the Rock Hall. During his speech, Ice Cube addressed Gene Simmons, the singer and guitarist in KISS, the band that was inducted into the Hall of Fame in 2014.

Last month, in an interview with Rolling Stone, Simmons revealed that he is "looking forward to the death of rap." MC Ren was, in fact, the first person to mention Simmons upon his group's on-stage induction: "And I want to say to Mr. Gene Simmons, hip-hop is here forever! Get used to it!" Cube then followed Ren's lead to explain why he feels hip-hop belongs in the Rock & Roll Hall of Fame.

"Rock 'n' roll is not conforming to the people who came before us, but creating your own path in music and life," he explained. "That is rock 'n' roll to us."

Simmons quickly caught wind of the remarks N.W.A. sent his way, and he took to his Twitter to respond to Ice Cube's argument that hip-hop belongs in the Rock Hall. He tagged Cube in a post that reads, "Respectfully -- let me know when @JimiHendrix gets into the hip hop hall of fame. Then you'll have a point."

As for Simmons' wishes to see the demise of hip-hop, he'll be long dead and gone before that day ever comes.