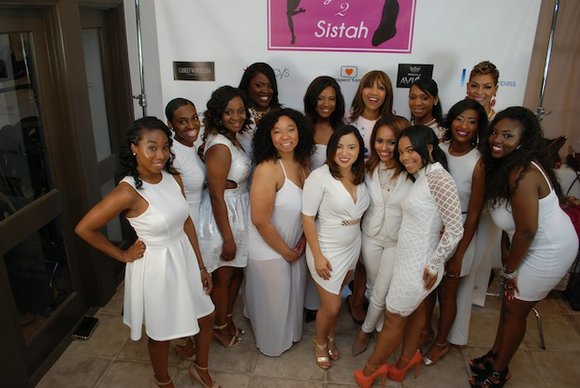 “We all have a past, some of it littered with scars and, believe it or not, it gives us a common bond that should be unbreakable.” That common bond brought women of influence from around the country to Houston’s Museum District on Saturday.

Rebecca Briscoe and Nakia Cooper hosted the 2nd Annual Sister 2 Sistah Dinner Party at the historic Buffalo Soldiers National Museum. The dinner party was an empowerment soiree like non-other, bringing young women of color face-to-face with inspirational women who have walked their all-too-familiar walk, and have come out victorious on the personal and professional sides.

Sister 2 Sistah is a mentorship program co-founded by Briscoe and Cooper, who both experienced obstacles in their younger lives. Both women are media professionals rising in their field, and said they were saddened to see so many college girls fighting to overcome hardships such as suicide, homelessness, limited job prospects, lack of finances, and abusive relationships. They knew something had to be done.

“I went through hell when I was in college. I was in an abusive relationship and, after that ended, found myself as a single mother struggling to keep my grades up and make ends meet,” Cooper said. “But I did it. Not only did I graduate with honors, but I landed my dream job in a top 10 television market and, even though I still have everyday struggles, things just keep getting better. I show our mentees if I could do it, so can they. That’s what Sister 2 Sistah is about. We provide resources and encouragement to help them along their way.”

The evening was opened with words of encouragement from Congresswoman Sheila Jackson Lee, who took time out to phone in from an airport runway before heading to a Hillary Clinton presidential campaign event. A representative from the congresswoman’s office presented Briscoe and Cooper with proclamations, honoring them for their service and dedication to the youth.

Lieutenant Governor Dan Patrick also sent letters of recognition to Briscoe and Cooper for their commitment to mentoring. Patrick met the women and their mentees after he appeared on a live broadcast of a television show.

At the dinner party, guest speakers shared stories of humble beginnings, struggles and triumphant risings while enjoying a gourmet meal. The speakers, all African American women, were among the “Who’s Who” of Corporate America, health and education.

The first lady of Texas Southern University and Executive Director for Assessment at Thurgood Marshall School of Law, Dr. Docia Rudley, welcomed the mentees, many of whom would be graduating from college in May.

The girls also received guidance on spiritual, physical and mental health and wellness.

“As black women we are expected to be so strong and carry heavy burdens, it’s overwhelming. We are expected to be beautiful, and professional and moms sometimes, but who do we turn to? What Nakia and Rebecca are doing is amazing and I was honored to be a part of it,” Edwards said.

Dr. Anitra Johnson, MD, PA of Clear Lake OB/GYN educated the women on sexual health and wellness in a “keeping it real” way the younger ones could relate to.

“These women took the time out to help me, to advance me, and with everything that I was going through, to feel love,” she said.

Prairie View A & M University senior Kresenda Foreman said the opportunities provided by Briscoe and Cooper have helped her prepare for the workforce.

“It helped me network in a lot of ways and so it is good to think they are thinking of me just as much as I’m thinking of them,” Foreman said.

In addition to Texas Southern and Prairie View A & M universities, students from Sam Houston State and the University of Texas are a part of the organization. The newest “sistahs” were inducted into Sister 2 Sistah with a ceremonial pinning of pink roses.

“The goal of the evening was to empower and inspire, but most importantly to interact with women of influence who wanted to share and provide career opportunities,” Briscoe said. “We are looking to expand our reach outside of the state of Texas.

The mood of the evening was kept light as the women shared. Avion Tequila, one of the sponsors of the event, provided signature cocktails and educated guests with a mixologist tutorial. Other sponsors included Macy’s, Casket World USA, BBVA Compass, NOVO Foundation and LoveIsRespect.org.