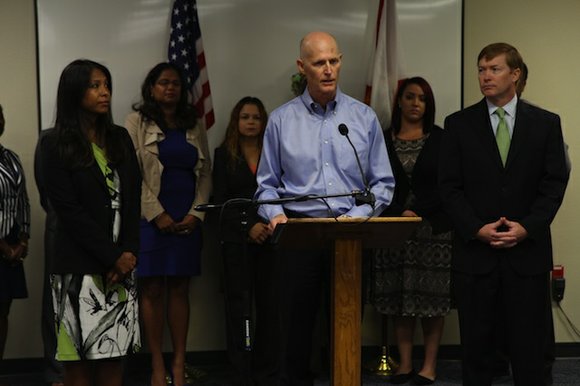 (CNN) -- More people in Florida may have caught the Zika virus after being bitten by local mosquitoes, Gov. Rick Scott announced today. On Friday, state health officials confirmed that four people had obtained Zika from mosquitoes in a square mile area just north of downtown Miami.

"Today, Florida's Department of Health has confirmed that 10 additional people have contracted the Zika virus locally, likely through a mosquito bite," Scott said. It was unclear from his remarks whether sexual and blood transmission had been ruled out. Until Friday, those were the only ways people had been infected with the virus locally.

The vast majority of cases of Zika in the United States have been from travel to other countries where the virus is actively circulating, a total of more than 60 countries and territories.

"Following today's announcement, I have requested that the Centers for Disease Control activate their emergency response team to assist (the Department of Health) in their investigation, research and sample collection efforts," Scott said. "Their team will consist of public health experts whose role is to augment our response efforts to confirmed local transmissions of the Zika virus."

Scott also said the CDC has issued a notice to women who are pregnant or thinking of becoming pregnant to avoid unnecessary travel to the affected area just north of downtown Miami.

According to the Florida Department of Health website, workers are going door-to-door to identify those who may have been infected and to collect urine samples. The virus stays active in urine longer than than in blood.

Blood donation screening is also in place as of Friday, according to Susan Forbes, vice president of marketing and communications for OneBlood. OneBlood is the sole blood provider in South Florida and handles most blood collection statewide.

Any donations that test positive will be discarded, and the donor will be notified, Forbes said.

Nearly every state is reporting cases of the virus; only Idaho, South Dakota, Wyoming and Alaska have not reported it. Until the announcement Friday in Florida, none of those cases was from local mosquito transmission. Fifteen of those individuals were infected by sexual transmission, and there is one case of a laboratory-acquired infection.

U.S. health officials had warned that there would be local transmission of the virus from mosquitoes but say they don't expect it to be widespread, as has been seen in Puerto Rico and throughout the Americas. That's based on outbreaks of two similar mosquito-borne diseases, dengue fever and chikungunya. The reason is largely because of living conditions, including mosquito-control efforts and regular use of air-conditioning.

Earlier in the month, Scott activated a Zika information hotline for Florida residents and visitors, as well as anyone planning on traveling to Florida in the near future. That number is 1-855-622-6735.