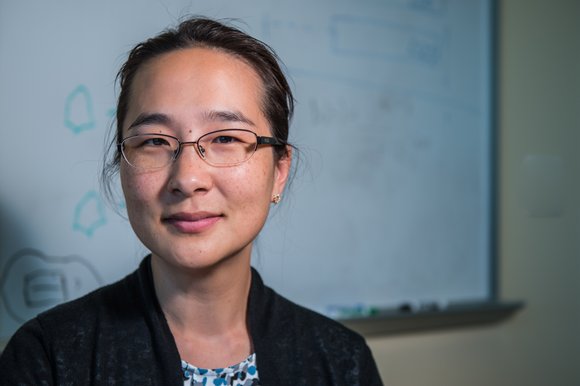 HOUSTON – (Aug. 3, 2016) – Rice University bioengineer Junghae Suh has been awarded a prestigious R01 grant by the National Institutes of Health to research the use of viral gene therapy to fight ovarian cancer.

The grant for $1.8 million, administered by the National Cancer Institute, will fund five years of collaborative research with Dr. Anil Sood, a surgeon, researcher and ovarian-cancer specialist at the University of Texas MD Anderson Cancer Center.

About 20,000 women in the United States are diagnosed with ovarian cancer each year, and nearly 14,500 die of the disease, according to the Centers for Disease Control and Prevention.

The grant will help Suh and her lab adapt otherwise-harmless adeno-associated viruses to recognize extracellular enzymes that are overexpressed by ovarian-cancer tumors and deliver therapeutic genes to diseased cells.

"Proteases are expressed in normal tissue remodeling, but if you cut open and look at tumor tissue, you find them in highly elevated levels," Suh said. "Proteases are enzymes that chew up proteins. In cancer, they help tumors grow, migrate and metastasize to other sites in the body.

"We're going after them as a target biomarker to activate our viruses," she said. "Our viruses are designed to be locked in the inactive state. They need to be opened by the proteases present at tumor sites. Once the viruses are unlocked, they become very sticky. They stick to the tumor cells and get internalized, which allows them to deliver toxic payloads to kill the cells."

She said the viruses can be tuned to recognize overexpressed levels of proteases while ignoring normal expression to protect healthy cells. The researchers anticipate AAVs will be able to target both primary tumors and metastasis sites.

Suh hopes that if and when AAVs prove their ability to treat ovarian cancers, they will be used to target other cancers. "We can control which proteases and at what concentrations they activate the virus, so we can readily modify the virus for the treatment of other diseases."

Suh has been working on the project since she met Sood in 2009. "He had the clinical expertise, and I had the virus engineering background, so we decided to try it," she said. "At that point, we had very few expectations and it was a high-risk idea. Since then we've had a number of small grants to feed the project, including funding from the Cancer Prevention and Research Institute of Texas. It took us many years to get enough preclinical data, but we now finally have the evidence that our concept works."

In the meantime, she said, gene therapy as a field has advanced significantly, as evidenced by approval of an AAV-based therapy for treating an orphan disease by the European Commission, Europe's equivalent of the U.S. Food and Drug Administration.

Suh recently won the Outstanding New Investigator Award from the American Society of Gene and Cell Therapy in recognition of her important contributions to the field.