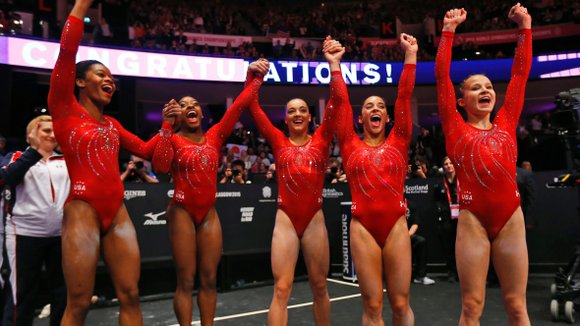 (CNN) -- The first set of results is in, and it's confirmed: The US women's gymnastics team is that good.

And barring a major disaster, the question heading into the team final Tuesday afternoon at the Rio Olympic Arena won't be whether these five American women will win gold. It will be which teams get silver and bronze behind them.

On Sunday, Team USA dominated team qualification. The US led all countries with a total score of 185.238, almost 10 points higher than the second-best team, China (175.279).

In short, this is the team to beat.

"They were not only physically prepared, but mentally prepared, and that's a nice place to be because you don't have to snap anybody into place," US Olympic coach Aimee Boorman said, according to the USA Gymnastics website. "It was fantastic."

The US lineup for the team final looks like this:

"Simone is Simone," US national women's team coordinator Martha Karolyi said. "She is a big talent, but she proved also at controlling herself and how she is able to perform under pressure. There's a reason why she's three-time world champion. Simone is doing gymnastics because she wants to prove to the world how good she is."

On Sunday, the US had the top three all-around finishers. After Biles, Raisman (60.607) finished second and Douglas (60.131) was third. Both were members of the "Fierce Five" gold-medal winning team from the 2012 London Games. It will be Raisman's second appearance in an Olympic individual all-around final; she finished fourth in London.

However, while the top 24 qualify for the individual all-around final, which is Thursday, only two are eligible from each country for that competition. That means Douglas, the reigning Olympic all-around champion, has been left out for Thursday.

But Douglas' performance wasn't wasted, as she qualified for event finals with a third-place finish on uneven bars (15.766).

"It's not really a bummer," Douglas said. "I wanted to go out there and defend my title, but it is what it is. I'm still rejoicing. I'm pretty pleased with everything overall because there's nothing to be ashamed about."

In fact, all of Team USA qualified for the event finals, which will begin Sunday. Kocian had the highest score on bars (15.866), while Hernandez (15.366) was second on beam. Raisman, who took home gold in the London Games in 2012 on floor, was second in the event on Sunday with a 15.275.

"I think everyone out there, we all performed how we trained, and that's all very special -- something we have to keep for team finals and any event finals that we qualified for," Biles said.

But on Tuesday afternoon, the focus is squarely on the team final. And the five will have to deliver again.