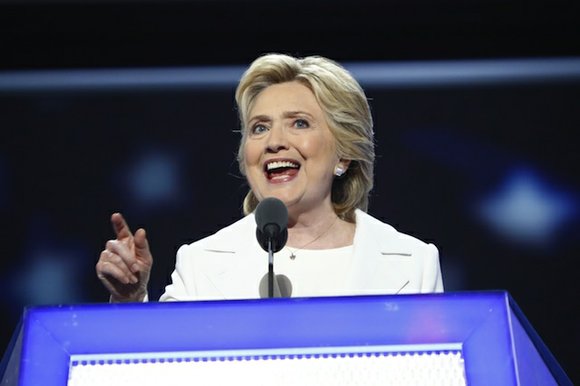 PHILADELPHIA (CNN) -- On paper, Pennsylvania and its 20 electoral votes look like a slam-dunk for Hillary Clinton

"Predictions would be foolhardy" says Terry Madonna, presidential historian and longtime Pennsylvania pollster at Franklin and Marshall College. "Yes, Secretary Clinton has a sizable lead now, but this year almost anything can happen."

Clinton has several strengths here. Her statewide campaign operation is enormous and growing. The state has 800,000 more active Democratic voters than Republicans. She got a huge bounce from the Democratic convention held in Philadelphia. And the last time a Republican presidential candidate won Pennsylvania, Kokomo by the Beach Boys was topping the charts -- that was in 1988 by the way.

But David Urban, senior adviser to the Trump Campaign for Pennsylvania, says there is one thing Clinton doesn't have -- enthusiasm.

Working in Trump's favor, Pennsylvania voters are traditionally working class and not particularly ideological. Barack Obama handily beat John McCain in 2008 but won by a much smaller margin against Mitt Romney in 2012.

Republicans here also point out that the party performs quite well at the state level. After all, the GOP controls both houses of the state legislature and 13 of the state's 18 congressmen are Republicans.

"We're part of the so-called Rust Belt theory," says Madonna. "Win the white blue-collar workers in Pennsylvania, Ohio, Michigan and Wisconsin and you got an electoral college mix that could get Donald Trump to 270."

Consequently, the Clinton campaign appears to be leaving little to chance. It views Pennsylvania as a firewall; stop Trump here and one forecloses a menu of options for him getting to 270. This week alone, the Clinton campaign and Democratic Party opened eight offices statewide. It's even going after conservative votes. Soon it will have offices in 12 conservative counties won by Romney in 2012.

Clinton's Pennsylvania headquarters is a hive of activity, located high up in a gleaming Philadelphia office tower. To date, she has three dozen offices scattered across the state and soon will have four dozen.

By contrast, the Trump campaign is only just this week opening its first three major Pennsylvania offices, in Pittsburgh, Harrisburg and Philadelphia.

"I think the Clinton campaign is a little bloated," says Urban. "We don't need 500 people in Pennsylvania right now. When needed, we'll be able to match them toe-to-toe."

The Clinton campaign, as of the convention in late July, had 300 people on the ground in Pennsylvania staffing its offices across the state. In addition to Lebanon, Clinton has also opened an office in York, which is a Republican leaning county.