Ayotte: I will 'stand up' to Trump but will vote for him 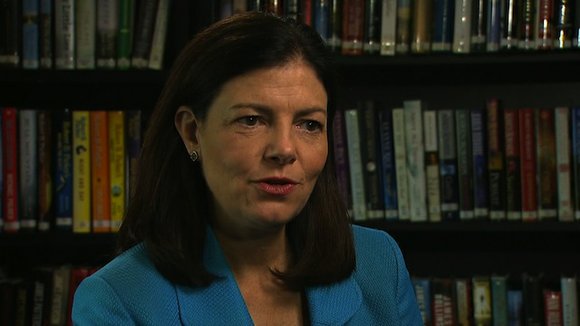 In an interview with CNN on Monday, August 15, 2016, New Hampshire Senator Kelly Ayotte said she will stand up to Trump, but still "will vote for him."

But in this fiercely independent state, Ayotte is gambling that voters might reward her for rebuking her own party's nominee. She has criticized Trump and will not endorse him -- yet still plans to vote for the billionaire in November.

"I will take on my own party," Ayotte told CNN in Nashua Monday. "I really believe that this is a big issue in this race -- that I am the one candidate that will stand up to whomever is in the White House to do good things when we can work together -- also when it's wrong to stand up to them."

Ayotte is one of more than a half dozen Republican senators whose fate this fall is critical to saving the GOP's beleaguered Senate majority. And with Trump's standing now eroding rapidly in battleground states, Republican senators need to convince Hillary Clinton voters to split their ticket, warning of the perils of one-party rule in Washington.

For Ayotte, that means spotlighting her criticism of Trump while painting her Democratic opponent, New Hampshire Gov. Maggie Hassan, as a candidate who would simply toe the party line. Selling voters on her independent bona fides may be her best hope.

"The people of New Hampshire need to know are you ever going to disagree with your nominee? And unfortunately, Gov. Hassan has not," Ayotte said.

In an interview in Boscawen, New Hampshire, Hassan said she does differ with Clinton on some issues -- like the former secretary of state's support for closing the prison in Guantanamo Bay and on an online sales tax issue. But Hassan is aligning herself closely with Clinton, stumping with Sen. Tim Kaine at a Manchester rally last weekend and touting the former secretary of state's candidacy in an interview.

"I think that Hillary Clinton and I work for many of the same things, expanding middle class opportunity so that everybody who wants to work hard to get ahead can stay ahead," Hassan said Monday

Yet, being tied too closely with Clinton carries its own risks, with 64% of voters nationally in a recent CNN-ORC poll saying that the former first lady is not honest or trustworthy.

Asked three times if she believes Clinton is honest, Hassan would not answer directly. "I support Hillary Clinton for the presidency because her experience and her record demonstrate that she is qualified to hold the job," Hassan said.

Asked again if she believed Clinton is honest, Hassan touted Clinton's agenda. And asked a third time, Hassan ultimately said: "She has demonstrated a commitment always to something beyond her self, bigger than herself."

The Hassan campaign later clarified the governor's statement, saying she does indeed believe that Clinton is honest.

In the interview, the governor also did not express concerns over FBI Director James Comey's sharp criticism of Clinton's handling of classified emails as "extremely careless."