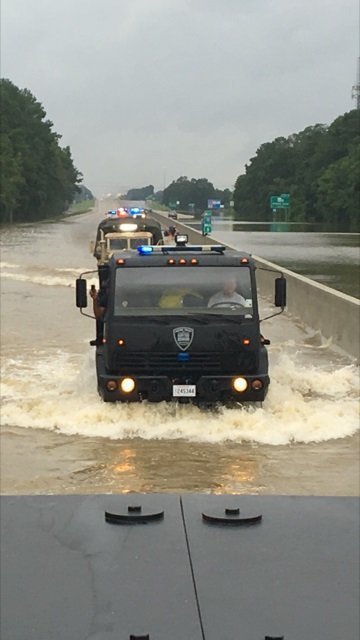 Gretna Police Deputy Chief Anthony Christiana tells CNN they are utilizing four or five military vehicles (5 ton transport vehicles) to assist with the flooding situation in Baton Rouge, LA. 22 personnel are also there to support the rescue mission of thousands of people stranded in floodwaters. Christiana says they also sent down three or four rescue boats and additional support vehicles.

They're known as the "Cajun Navy," and in recent days they've become possibly the nation's most important neighborhood watch.

He drove to East Baton Rouge Parish where the National Guard had a staging area.

They paired him with a local man and the two spent a full day pulling people -- at least two of them in wheelchairs -- out of flooded houses.

At one point Green recalled having nine people, a cat and two dogs aboard. He had to return the next day to get a lady's pet bird.

"People were brokenhearted. You could see it," he told CNN. "You couldn't put a smile on their face."

The devastation, he said, was overwhelming.

'Trying to wake people up'

Steve Spell set out to do what he could in his village of Springfield, in Livingston Parish, one of the hardest-hit areas.

His Warsaw Marina neighborhood was cut off from the outside world, and his neighbors had formed an emergency camp on a remaining section of dry ground.

Spell made a series of trips to check on neighbors and found one elderly woman wading through her kitchen, where she had several dogs in portable pet cages.

"I've been coming back and forth to check on animals and deliver food and water," he said. "It's not the safest area to be in at all."

Terry Felder said he barely made it out of his neighborhood in Denham Springs, east of Baton Rouge. He awoke the morning of the flood and stepped outside to see water rising, quickly. The road outside his house was rapidly becoming a river.

He didn't return to shut the front door of his home. He just made for his vehicle.

"I immediately jumped in and took off, and started blowing the horn right there; and I just leaned on the horn all the way," he told CNN. "Stopped in front of all the houses, blowing the horn, trying to wake people up.

"It woke people up, but it was too late for them. Most of these people were in their beds sleeping."

Tens of thousands were forced to abandon their homes and virtually all their belongings.

Some didn't escape in time. At least 11 have died in the flooding, Gov. John Bel Edwards said Tuesday.

Officials from various parishes had put the death toll Monday night at nine, including some swept away in cars on flooded streets. The reason for the conflicting death tolls was not immediately clear.

Because this flooding was not spawned by a named storm or hurricane, Edwards called the deluge "historic" and "unprecedented."