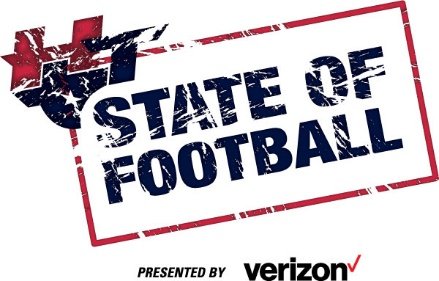 The Houston Texans will play the New Orleans Saints this Saturday, Aug. 20 in the State of Football Game presented by Verizon. Kickoff is set for 7 p.m. CT at NRG Stadium.

The State of Football Game celebrates and promotes football at all levels in the state of Texas and supports player safety initiatives. The halftime matchup will include the Youth Football Classic presented by Nike featuring the Fort Bend Youth Football League Roughnecks vs. Steers, from the Houston Texans Showcase League presented by Fuddruckers.

Both teams visited training camp and got the chance to meet with Executive Vice President of Football Operations and General Manager Rick Smith. During their visit, Smith congratulated them on being selected to play at halftime and addressed the importance of Heads Up Football.

The Houston Texans and the NFL are dedicated to supporting youth football and promoting safety initiatives. Through the generous support of the NFL Foundation, USA Football will distribute $2 million in equipment and uniform grants this year. Because of the support of the Houston Texans and USA Football, more than 25 schools in the Houston area will receive grants that support safe and fun football for the youth of our city.

Below are more details on in-game entertainment and what to look out for at this weekend’s matchup against the New Orleans Saints in Houston:

· Highlighting the pregame events will include a special performance by the 2016 Jr. Cheerleaders presented by Texas Children’s Hospital and the Houston Texans Cheerleaders.

· Special presentations at the State of Football ceremonies will include the GE and Methodist Most Valuable Moms Kickoff Celebration and Coach of the Year Recognition with 2016 Coach of the Week Kickoff presented by Houston Methodist.