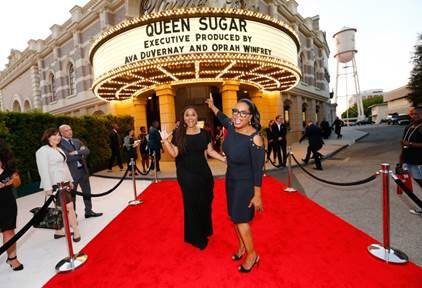 Los Angeles, CA – On Monday, August 29th, OWN: Oprah Winfrey Network hosted an exclusive screening at the Warner Bros. Studio Lot’s Steven J. Ross Theater to celebrate the premiere of “Queen Sugar,” the network’s highly anticipated new original drama series from award-winning filmmaker Ava DuVernay and executive producer Oprah Winfrey. The series will debut as a two-night event on Tuesday, September 6 *commercial free and Wednesday, September 7 at 10 p.m. ET/PT on OWN: Oprah Winfrey Network. The series, which chronicles the lives and loves of three estranged siblings, will regularly air Wednesday nights at 10 p.m. ET/PT for the remainder of its 13-episode first season.

Following the screening, Oprah, Ava, the cast and guests continued the celebration on the lot’s Brownstone Street and dined on Louisiana cuisine favorites such as beignets, jambalaya, bananas foster and other treats.

For press materials, please visit http://press.discovery.com; to join the conversation on social, use #QueenSugar @QueenSugarOWN.

The contemporary drama “Queen Sugar” chronicles the lives and loves of the estranged Bordelon siblings in Saint Josephine, Louisiana: Nova (Rutina Wesley, “True Blood”), a world-wise journalist and activist; Charley (Dawn-Lyen Gardner, “Unforgettable”), the savvy wife and manager of a professional basketball star; and Ralph Angel, (Kofi Siriboe, “Awkward”), a formerly incarcerated young father in search of redemption. After a family tragedy, the Bordelons must navigate the triumphs and struggles of their complicated lives in order to run an ailing sugarcane farm in the New South. Led by acclaimed film director DuVernay, who directed the first two episodes, all episodes in the series’ debut season are directed by women. “Queen Sugar” is produced for OWN by Warner Horizon Television. The executive producers for season one are Ava DuVernay, Melissa Carter and Oprah Winfrey. The series is based on the book by Natalie Baszile.

OWN: Oprah Winfrey Network is the first and only network named for, and inspired by, a single iconic leader. Oprah Winfrey's heart and creative instincts inform the brand – and the magnetism of the channel. Winfrey provides leadership in programming and attracts superstar talent to join her in primetime, building a global community of like-minded viewers and leading that community to connect on social media and beyond. OWN is a singular destination on cable. Depth with edge. Heart. Star power. Connection. And endless possibilities. OWN is a joint venture between Harpo, Inc. and Discovery Communications. The network debuted on January 1, 2011 and is available in 85 million homes. The venture also includes the award-winning digital platform Oprah.com. For more information, please visit www.oprah.com/own and press.discovery.com/us/own.

Warner Horizon Television (WHTV) is one of the entertainment industry’s leading producers of scripted series for the cable and subscription/on-demand marketplace, and primetime reality series for both network and cable. A division of the Warner Bros. Television Group, WHTV was founded in 2006. Its current scripted programs are Animal Kingdom for TNT, People of Earth for TBS, Pretty Little Liars and Famous in Love for Freeform, Longmire and Fuller House for Netflix, and Queen Sugar for OWN. WHTV’s unscripted series are The Voice and Little Big Shots for NBC; The Bachelor franchise — which also includes The Bachelorette, Bachelor in Paradise and After Paradise for ABC, as well as Ben and Lauren: Happily Ever After for Freeform — plus 500 Questions for ABC; and Love at First Kiss for TLC, among others.