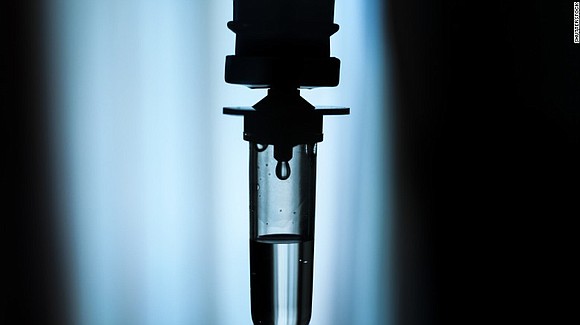 (CNN) -- A new vaccine helped leukemia patients fight their cancer and stay in remission for an average of almost five years, according to new study.

Patients who had undergone chemotherapy to treat acute myeloid leukemia received vaccines personalized to their own form of the disease, to stimulate a potent immune attack against it and reduce the likelihood of their cancer returning.

For the trial, people over the age of 60 were particularly targeted, as only 15% to 20% of this age group remains leukemia-free for two years, on average, after receiving chemotherapy.

During the study, published in Science Translational Medicine on Wednesday, the vaccine was shown to more than double this average remission period for the majority of people involved in the trial.

"More than 70% of patients had gone 4½ years without their leukemia coming back," said Dr. Jacalyn Rosenblatt, assistant professor at the Beth Israel Deaconess Medical Center at Harvard Medical School, who led the research. "We need better therapies to cure this disease ... (and) were very excited by these preliminary results."

The need for new therapies

Although chemotherapy kills these abnormal cells, most patients eventually relapse, often with a resistant form of the cancer, according to the researchers. Even in patients under the age of 60, the five-year survival rate is just 34%.

But acute myeloid leukemia typically affects older people, according to the American Cancer Society, with the average age of a patient being 67 years, making new therapies essential as remission is short-lived in older patients. Additional treatments, such as bone marrow transplants, pose too many risks due to their potential side effects.

This form of leukemia has been estimated to affect almost 20,000 people in the United States in 2016.

Aiding remission with a vaccine

Rosenblatt's team developed a vaccine that could be personalized to patients and injected to stimulate a potent immune response against their cancer. The vaccine fuses a person's own leukemia cells with immune cells called dendrites that are known to stimulate a strong immune response, boosting the number of leukemia-specific T-cells in the body that fight and kill the tumor cells.

"(We created) this hybridoma that stimulates the immune system and (helps it) recognize the tumor," Rosenblatt said. "It's specific to a patient but broad against (attacking) that person's tumor."

The vaccine was tested in 17 people ranging in age from 32 to 77 years, with a median age of 63. All of them had received chemotherapy and achieved remission.

The goal was to keep them that way.

After receiving the vaccine, all the participants remained cancer-free for at least a year, and 12 stayed in remission for an average of four years and nine months. But doctors are continuing to monitor them.

Retired neurosurgeon Ernest Levy, 76, was one of the 17 patients who benefited from the vaccine.

In 2010, he began feeling fatigued during a visit to the soccer World Cup in South Africa. On his return to the US, he sought immediate care and was soon diagnosed with acute myeloid leukemia.

He was told he had only a 10% chance of surviving just a short period of time. For the father of three and grandfather of six, it was something of a shock, but Levy kept his medical hat on and remained practical.

"You get to this realization that this is it. ... My children flew out to see me, thinking it could be a few weeks" he had left, he said.

He was told about a vaccine that was in its very early stages but could improve his chances of prolonged remission. "I wasn't convinced that the vaccine was going to do much," he said.

As a medical professional, Levy knew that chances were slim and admits saying yes, at first, as a form of repayment to help the people who had worked so hard to keep him alive. "I wanted to help," he said.

But after three doses of the trial vaccine in 2011, Levy's prognosis of living for just a few weeks became almost six years and counting.

"I wouldn't like to go through it again. The treatment (chemotherapy) was quite horrific ... but you get over that and get back to normal, whatever that is," he said.

Today, Levy is not showing any signs of relapse and says he feels as fit as he did before his diagnosis.

"I'm going to be around and as active as I can be, and hopefully, it will be for a long time," he said.

A therapy for older patients

Although chemotherapy for acute myeloid leukemia is effective in the short term, researchers have been developing therapies to maintain remission for longer periods.

The main treatment enabling this to date is allogenic stem cell transplantation -- a bone marrow transplant -- in which the blood or bone marrow of a closely matched donor is used to source stem cells that are transplanted into the cancer patient, enabling them to generate immune cells that kill the cancerous cells. If effective, this can cure the cancer.

But stem cell transplants are not always possible, for example, due to donor availability. They may not be effective due a patient's age, side effects such as the new immune cells attacking other parts of the body, or the presence of other diseases. The team believes personalized vaccines could be a viable option for those unable to receive stem cell transplants.

The goal is to "manipulate someone's own immune system to reap the benefits (of bone marrow transplantation) without the side effects," Rosenblatt said. "If we can produce a vaccine with the same potency ... that would be a major improvement for these patients."

The trial was small, however, and the team stresses in its paper that larger randomized trials are needed to confirm the results.

For now, the findings show great promise to others in this field.

"To see these kinds of responses in this type of patient population is very exciting. ... Other approaches to treat AML are either nonspecific (chemo) or have high mortality; this approach has the potential, underline potential, of eliminating those issues," said Dr. Susanna Greer, director of clinical research and immunology for the American Cancer Society. But Greer further stresses the need for more results.

"Followup studies with larger trials to evaluate booster vaccination will provide critical evaluation of differences between patients who relapse and those who remain in remission, but overall, this could be real game changer for AML patients."

Dr. Jeff Davies, consultant hemato-oncologist at the Barts Cancer Institute in the UK, agrees that more evidence is needed.

"A large comparative study is needed to prove whether the immunity they present is actually preventing the relapse," he said, adding that feasibility could also be a limitation."It's a bespoke approach ... making it expensive and labor-intensive."

But Davies too is excited by the findings overall. "AML hasn't been impacted by all the new developments in immunotherapy ... but here, they were able to demonstrate a way to stimulate a person's immune system in a personalized way, which has previously been difficult to do."

Rosenblatt's team plans to start a larger trial within the next few months, including more than 100 people with this form of leukemia.

"You never know in an initial small study," she said. "We hope to see this replicated in our larger study ... and if so, the goal would be to make this available."