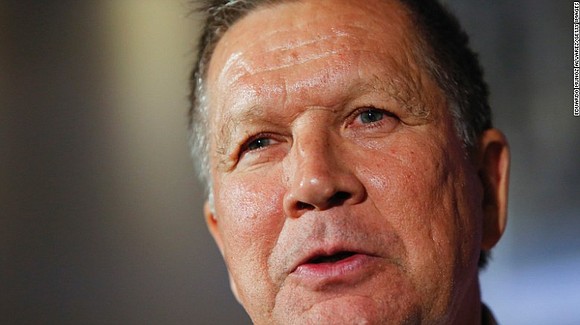 By Max Blau and Dominique Debucquoy-Dodley

(CNN) -- Ohio state lawmakers have passed a controversial "Heartbeat Bill" that would ban abortions from the moment the heartbeat of a fetus can be detected -- which usually occurs about six weeks into a pregnancy.

Now Republican Gov. John Kasich, who this year lost his White House bid, must decide whether to approve a law that would ban abortions even in cases of rape or incest -- likely dragging the state into a litany of court challenges -- or veto the bill.

The bill would be one of the toughest restrictions on abortions in the country.

On Tuesday, the Ohio Legislature sent the bill to Kasich's desk after a day filled with legislative maneuvering.

Earlier in the day, state Sen. Kris Jordan, a Republican from Ostrander, called for an amendment that added provisions from the House-sponsored "Heartbeat Bill" to another measure, House Bill 493, that sought to streamline the process in which medical professionals report child abuse situations.

"We are a pro-life caucus...," Jordan said in a statement. "The passage of this legislation in the Ohio Senate demonstrates our commitment to protecting the children of Ohio at every stage of life."

The Senate voted twice: First, they approved 20-11 the decision to tack on the "Heartbeat Bill" language onto House Bill 493. After the amendment passed, the state senators passed the bill with a 21-10 vote that largely went along party lines.

Ohio state Sen. Charleta Tavares, a Columbus Democrat, had planned on voting for the child abuse bill, as originally presented, but ultimately voted against it because she opposed the "Heartbeat Bill" amendment and change in language.

"I believe everyone has a right to their own body," Tavares told CNN. "We allowed a good bill that protects the health and safety of our children to be bastardized into a government takeover of women's wombs."

After the bill went back the House, state representatives easily approved the revised bill 56-39 on Tuesday night. It now goes to Kasich for his signature.

Where does Kasich stand on abortion?

Emmalee Kalmbach, a former Ohio Right to Life staffer who is now Kasich's press secretary, said the governor does not typically comment on pending legislation.

Earlier this year, Kasich told CNN that he was "pro-life with the exceptions of rape, incest and the life of the mother."

In 2011, Kasich signed off on a bill that banned abortions once a pregnancy hit the 20-week mark except for cases where a doctor determined the fetus could not live outside the womb, the Cleveland Plain Dealer reported at the time.

And earlier this year Kasich signed a bill to banned the state from contracting for health services with any organization that performs or promotes abortions -- a measure widely seen as a way to defund Planned Parenthood.

He will have 10 days to veto the measure. If he doesn't take action, the bill would automatically become law.

Count on the courtroom

Despite his record, Tavares said she still hopes Kasich would line-item veto the "Heartbeat Bill" language.

The Heartbeat Bill has been called "unconstitutional" by members of both parties in the past, Tavares said. Though it passed the state House over a year ago, it previously met opposition in the Senate. On the heels of Donald Trump's election, momentum for the bill's approval resurfaced.

The ACLU of Ohio tweeted, "Just a reminder, if the unconstitutional #HeartBeatBill passes and becomes law, we will challenge it in court."

At least two other fetal heartbeat abortion laws -- in Arkansas and North Dakota -- we found to be unconstitutional in federal court.

Ohio state Sen. Joe Schiavoni, a Democrat from Boardman, said the bill would lead to "expensive lawsuits" that would divert resources away from more pressing issues like the opioid crisis.

"To the taxpayers of Ohio, I am sorry that your money will have to be used to defend this bill in the court system."

CNN's Tom Kludt and Cassie Spodak contributed to this report.