'Living Bombshell': World's Heaviest Woman Flies to India to Fight for Her Life 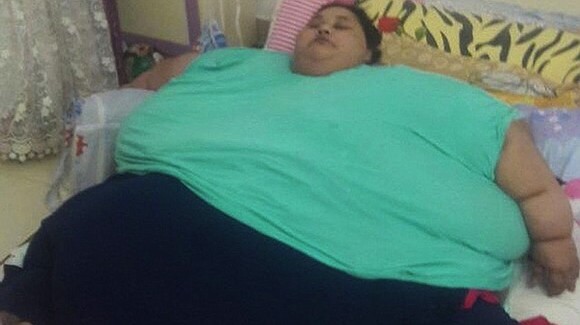 Eman Ahmed, from Egypt, is believed to be the world's heaviest woman. According to her family, she weighs 1,102 pounds (500 kg)."Eman didn't live life as everyone does," Shaimaa Ahmed, Eman's younger sister and carer, tells CNN. "She didn't enjoy her childhood or youth. She's been battling with her illness for 36 years."

By Juliet Perry and Sarah Sirgany

"Eman didn't live life as everyone does," Shaimaa Ahmed, Eman's younger sister and carer, tells CNN. "She didn't enjoy her childhood or youth. She's been battling with her illness for 36 years."

According to her family, Eman has barely left her bedroom in over two decades. Unable to move or communicate, she spends her days trapped inside her family home, staring at the ceiling.

A stroke two years ago impaired her speech and mobility, so the last couple of years have been particularly difficult, Eman's sister says.

However, thanks to a social media campaign initiated by Shaimaa, the family's situation is now looking a little more hopeful.

He plans to set in motion a series of operational procedures that will reduce her weight to below 220 pounds (100kg.)

"She is battling with her life every single day," Dr. Lakdawala told CNN. He says that as things stand, how long she lives is anybody's guess.

"Right now she is like a living bombshell, which could blow up on her any moment."

According to Guinness World Records, the world's heaviest living woman is Pauline Potter from the United States, who weighs 643 pounds (291.6 kg.)

'She always had hope'

Eman's family says she's suffered from thyroid problems since she was a child.

By fifth grade she'd stopped going to school because her thyroid problems were making her lethargic.

Her legs were also unable to carry her weight; she had to use her knees to move around because she couldn't stand.

"She would use her knees to reach the car in the parking lot and we would drive her across Alexandria and the coast without leaving the car," says her sister Shaimaa.

"She wasn't able to walk properly and there was no wheelchair to fit her size."

Despite her tragic circumstances, according to her sister, Eman always remained patient and funny.

"She has always had hope that she would lose weight and get better," Shaimaa says.

But a couple of years ago, things changed. Eman's weight went up to about 660 pounds (300 kg) so she put herself on a strict diet.

"Suddenly her cholesterol levels went up and she lost consciousness," says Shaimaa.

It took time to find a hospital that would run an MRI on someone of her size, and when they eventually did, she was diagnosed as having had a stroke.

According to Shaimaa, things went downhill from there.

The stroke reduced Eman's already limited ability to move and speak, and her family had to start taking care of all her needs.