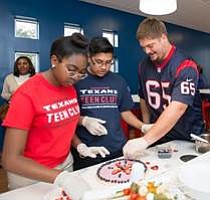 The Houston Texans will take on the Jacksonville Jaguars this Sunday, Dec. 18 in the annual Battle Red Day presented by Halliburton. Kickoff between the Texans and the Jaguars is set for noon at NRG Stadium.

Highlighting the weeks leading up to the game was the opening of the Houston Texans Teen Club in partnership with the Boys & Girls Clubs of Greater Houston (BGCGH). In February 2016, the Texans signed a five-year landmark partnership with the BGCGH to create the new Houston Texans Teen Club with a gift of $750,000, the largest single donation by a professional sports team in Houston. The facility is the first space of its kind in Houston exclusively for youth ages 14 to 17. Members of the Teen Club will be provided with the programming and facilities necessary to help them transition to adulthood. The space will include a college and career center, cafe, wellness center, counseling office, Carnival’s Endzone (game room) which was done in collaboration with Carnival Cruise Line, the official cruise line of the Houston Texans and a mural by Houston native, renowned artist, Jimmy Houston on the side of the building. The opening on Tuesday, Nov. 29 included a ceremony and ribbon cutting. Houston Texans DE Jadeveon Clowney, S Andre Hal and C Greg Mancz played video games and pool with teens, helped a Houston Food Bank chef prepare snacks and participated in yoga with Texans Cheerleaders.

Teen Club ManczIn addition to the Teen Club opening, the second edition of the Houston Texans Cookbook was released on Monday, Dec. 12. The cookbook, inspired by the Lady Texans, includes recipes from Houston Texans players, coaches and executives along with their families. All proceeds go to the Houston Texans Foundation in support of the Houston Food Bank, the Boys & Girls Clubs of Greater Houston and the Houston Texans YMCA. Cookbooks can be purchased online at Shop.HoustonTexans.com and in the Go Texan Store at NRG Stadium.

Sunday’s game will feature a number of exciting festivities. Simone Biles, 19-time combined Olympic and World Champion medalist, will lead the Texans onto the field as the Homefield Advantage Captain. Biles, the most decorated American gymnast, recently competed at the 2016 Summer Olympics where she earned gold medals in the individual all-around, vault and floor exercise competitions. She also led her team, nicknamed “The Final Five,” to becoming only the third American women’s gymnastics team to win a gold medal.

Below are details about in-game entertainment and what to look for when the Texans face the Jaguars this Sunday.

Member of the 2016 gold medal-winning gymnastics team “Final Five” and gold medalist in individual all-around, vault and floor exercise competitions, Simone Biles, will lead the Texans onto the field as the Homefield Advantage Captain.

Two representatives from Halliburton will serve as the Coin Toss Captains.

Members of the United States Marine Corps will present the color guard.

The Spazmatics, an 80’s cover band, will perform at halftime featuring the Houston Texans Cheerleaders.

Special presentations at Sunday’s game will include Reliant Scholarships for Champions, a United Way Check presentation and a BHP Billiton Community Quarterback presentation.