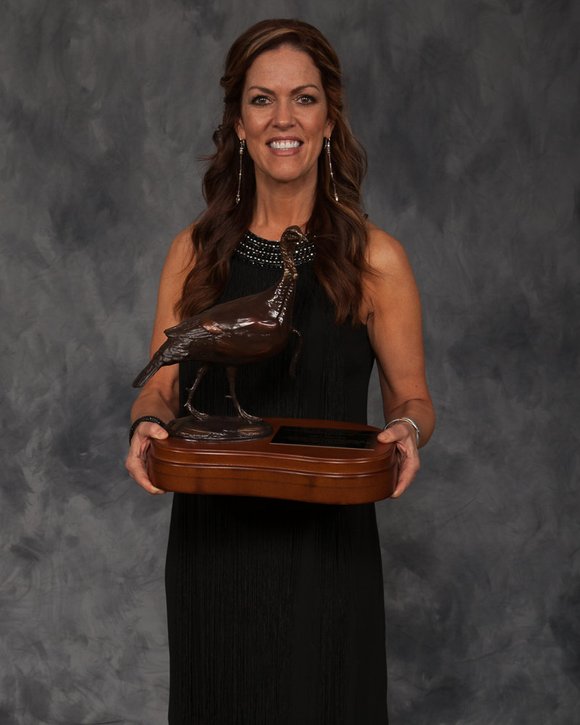 Waller, 2016 NWTF Communicator of the Year.

Waller regularly invites wounded veterans to join her for hunts, pens articles for Turkey Country magazine and is an NWTF spokesperson. She accepted the award at the 40th annual NWTF Convention and Sport Show. RAM is the official convention sponsor.

“To be listed among other industry leaders that I have high respect for, like Brenda Valentine, Steve Rinella and others before me, is an absolute honor,” Waller said. “I believe it’s important to convey to the world that hunters are the true protectors of our flocks, herds and habitat, and I am blessed to have a platform to convey my passion for hunting, conservation and wildlife.”

The NWTF determined this year’s award winners based on how their work strengthens the Save the Habitat. Save the Hunt. initiative. Waller, who is a lifetime member of the NWTF, takes time during each episode of “Skull Bound TV” to discuss the important role that hunters play in preserving our hunting heritage and conserving wildlife and habitat. She also encourages her viewers to join the NWTF and other conservation organizations.

Waller is an incredible artist who shares her hunting stories by creating beaded skulls from some of the animals she pursues. She donated a recent creation, a blesbok skull covered with Swarovski crystals, to the NWTF convention’s Ladies Auction to help raise money for conservation.

“Jana is a great spokesperson for the NWTF and the entire outdoor tradition,” said George Thornton, NWTF CEO. “She uses her platform to educate a broad audience about the importance of preserving our hunting heritage, a hunter’s role in conservation and the ethical pursuit of wild game.”

The NWTF Save the Habitat. Save the Hunt. initiative is a charge that mobilizes science, fundraising and devoted volunteers to give the NWTF more energy and purpose than ever. Through this national initiative, NWTF has committed to raising $1.2 billion to conserve or enhance more than 4 million acres of essential upland wildlife habitat, recruit 1.5 million hunters and open access to 500,000 acres for hunting, shooting and outdoor enjoyment. Without hunters, there will be no wildlife or habitat. The NWTF is determined to Save the Habitat. Save the Hunt.