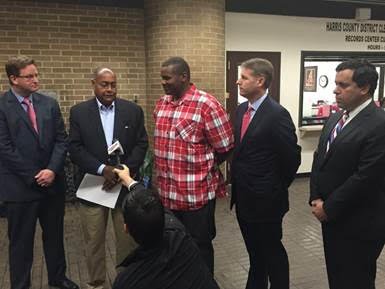 This morning, Sen. Rodney Ellis (D-Houston) joined Dewayne Brown and his attorneys in support of Dewayne's efforts to seek compensation for the 12+ years he wrongfully spent behind bars, including nine on death row.

"I am proud to stand with Dewayne Brown as he seeks the compensation he is rightfully owed under the law," said Sen. Ellis. "Let's face it: there is no amount of money that can repay someone for being on death row for nine years for a crime they did not commit. But the provisions of the Tim Cole Act, which I passed in 2001, exist to try to remedy the injustice that Dewayne suffered."

"It is days like today that make me so proud that I led legislative efforts to increase compensation for the wrongfully imprisoned," Ellis continued. "Since I changed the law in 2001, the state has paid more than $92 million in compensation to wrongfully convicted Texans. Why? Because these men and women deserve some semblance of justice. After all, Texas leads the nation in the shameful category of proven wrongful convictions."

Alfred Dewayne Brown – his family and friends call him Dewayne – was convicted of capital murder on October 18, 2005 for a crime he did not commit. Dewayne was wrongly accused of robbing a check cashing store located off 610 in southeast Houston with two other individuals in April 2003, which left a cashier and a police officer dead. Dewayne, however, was at his girlfriend’s apartment sick in bed at the time of the murders. Indeed, he called his girlfriend’s workplace from her apartment at around 10 a.m. that day, which was shortly after the murders took place and while the actual killers where on the run elsewhere.

Dewayne’s girlfriend and her employer both testified at trial that Dewayne had called about 10 a.m., but there was no evidence showing from where Dewayne made the call. Despite his alibi, which Dewayne maintained since the day of his arrest, the jury convicted him of capital murder, and he was sentenced to death on October 25, 2005.

Once Dewayne’s lawyers obtained the phone records (8 years after the State should have turned them over) they eventually were able to secure a reversal of his conviction and his eventual exoneration.