Flint Resident On Water Crisis: 'This Is An Embarrassment' 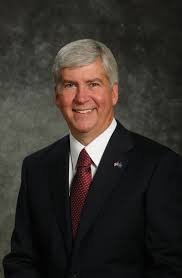 DETROIT (CNN) -- If Michigan Gov. Rick Snyder thought he'd calm fears and win over residents when he addressed the water crisis in Flint, he was mistaken.

"I want Gov. Snyder to solve the problem and basically get up out of office," longtime Flint resident Tomeko Hornaday told CNN, echoing the sentiments of many of the governor's critics.

In his speech, Snyder vowed to do everything in his power to solve the crisis of toxic lead contamination in the city's tap water, starting by asking legislators for $28 million to fund a series of immediate actions.

"No citizen of this great state should endure this kind of catastrophe," Snyder said. "Government failed you -- federal, state and local leaders -- by breaking the trust you placed in us."

But outside the address in Lansing, protesters expressed doubts their governor could lead efforts to fix this failure.

They chanted on the steps of the state Capitol, "Snyder must go."

Snyder's words also didn't appear to convince his critics beyond Flint and Lansing.

"There's no way to justify any of this," said U.S. Sen. Debbie Stabenow, a Democrat from Michigan. "Every single decision was made by the governor and this state government. ... The state government has the legal and moral responsibility."

The state should spend more to fix Flint's problems, she said, especially at a time when it boasts a budget surplus of $500 million.

Flint Mayor Karen Weaver has said the costs to undo the damage, both to infrastructure and residents' health, could be between $1 billion and $1.5 billion.

Democratic U.S. Rep. Dan Kildee called the figure Snyder proposed "a fraction of the money city residents have (already) paid for poisoned water that they cannot drink." And Stabenow said it would barely make a dent in paying for new water pipes that are needed because the old ones are damaged beyond repair.

"There's not a major commitment to make sure dollars go to fix this quickly," the senator told CNN's "New Day" on Wednesday. "And I continue to be stunned as we look at the slow walking of the state."

The Environmental Protection Agency is now looking at Michigan's entire drinking water program and how the Safe Drinking Water Act was implemented there. Its findings could add to the state's total price tag to address potential water woes.

These investigations follow the EPA's criticism about what it calls state and local authorities missteps in Flint.

The agency said in a statement, "What happened in Flint should not have happened."

Cleaning up the tap water and upgrading infrastructure are two big looming costs but hardly the only ones. In addition to investigations by the EPA, the local U.S. attorney's office and Michigan's attorney general's office, at least three lawsuits have been filed. Those suits seek individual damages for Flint residents -- about 500 and counting -- who have complained of health issues and worry about future ailments.

An attorney in one of those suits had a message for state officials: "Don't fight it."

In 2011, the state of Michigan took over control in Flint after a budget emergency there, and state officials later decided to switch over the city's water system from Lake Huron via the city of Detroit to the Flint River.

A lawyer involved in one of the lawsuits said the state is responsible for Flint's water woes and the ongoing problems -- the inconvenience and cost of having to rely on bottled water and filters as well as health ramifications from drinking lead-laced water.

"If you make the mess, you clean it up," attorney Michael Pitt said. "I'm reminding our elected officials of what my kindergarten teacher told me."

Snyder announced last week that the number of Legionnaires' disease cases in Genesee County spiked in two years, though another state official noted that not all those sickened drank Flint water.

Another big concern is lead poisoning. It can severely affect mental and physical development, especially in children for whom the Centers for Disease Control and Prevention notes there's "no safe blood lead level."

"Once the lead is in your body, it never leaves," Stabenow said. "It's horrible."

Rhonda Kelso, a plaintiff in one of the lawsuits filed in the crisis, called the situation "unconscionable."

"You really don't want to think about it; you want to block it out of your mind," she told CNN.

During the discovery process, lawyers said, attorneys and their clients should receive emails and other documents from government officials, including Snyder, that could shed light on a critical yet heretofore unanswered question: How the heck did this occur?

Pitt said Michigan's Department of Health and Human Services knew about elevated blood lead levels as far back as September 2014 "and sat on this information for 10 months."

"At a certain point, I think they were ashamed, embarrassed and humiliated," the lawyer told CNN's "New Day" on Wednesday. "They were not responding in a proper way, and when they were confronted, they still denied it."

Beyond whatever the official investigations find out, Pitt said that citizens taking action in the courts will lead to answers.

"It is pernicious," he said. "And the lawsuits are going to get to the whys (that) these individuals did it."

In April 2014, the state, which had appointed an emergency manager to Flint amid a financial crisis, decided to switch Flint's water source temporarily to the Flint River as a cost-saving measure until a new supply line to Lake Huron was ready.

The Flint River had a reputation for nastiness when the state made the switch, and a 2011 study found that before water from the Flint River could be considered potable, it would need to be treated with an anti-corrosion agent, a measure that would have cost the state about $100 a day.

After the switch, residents complained their water looked, smelled and tasted funny.

Virginia Tech researchers found the water was highly corrosive. A class-action lawsuit filed last year alleges the state Department of Environmental Quality didn't treat the water for corrosion, in accordance with federal law, and because so many service lines in Flint are made of lead, the noxious element leached into the water of the city's homes.

The city swapped back to the Lake Huron water supply in October.

But the damage was already done.