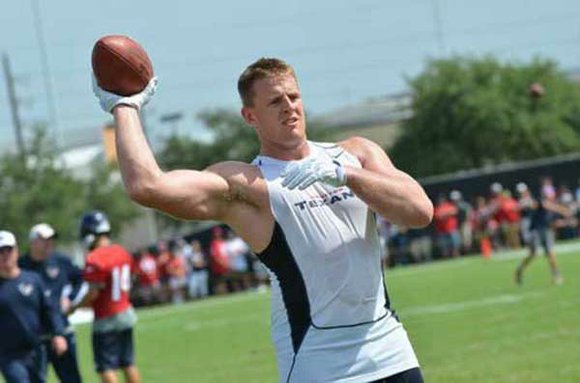 The accolade is the latest in a growing list of honors for Watt, who was named to the Pro Bowl, Associated Press All-Pro First Team and PFWA All-NFL team for the fourth consecutive year following another dominant season.

The 26-year-old defensive end finished the 2015 season leading the NFL in sacks (17.5), tackles for loss (29) and quarterback hits (50). Watt also recorded 76 tackles (57 solo), eight passes defensed, three forced fumbles and one fumble recovery on the way to his third AFC South Division title in the last five years. His sack total ranks as the third-highest single-season mark in franchise history behind his 20.5 sacks in 2012 and 2014.

Watt had six multi-sack (2.0-or-more) games in 2015 and now has 21 such games in his career, the second-most of any player in the NFL over his first five seasons in league history. Watt also put together his third career 15.0-sack season, the second-most in the NFL since 1982. Reggie White is the only other player to notch three 15.0-sack seasons in his first five years in the league.

The 2011 first-round pick from Wisconsin passed Derrick Thomas (66.0) for the second-most career sacks in a player’s first five seasons in NFL history and became the second-fastest player in NFL history to reach 70.0 sacks (Reggie White, 57 games). Since entering the league in 2011, Watt leads the NFL in sacks (74.5), tackles for loss (132) and quarterback hits (209). The 2015 season was Watt’s fourth-straight season with 10.0-or-more sacks, which is the longest active streak in the NFL. He also became the first player in team history with four seasons (2012-15) of 10-or-more sacks.