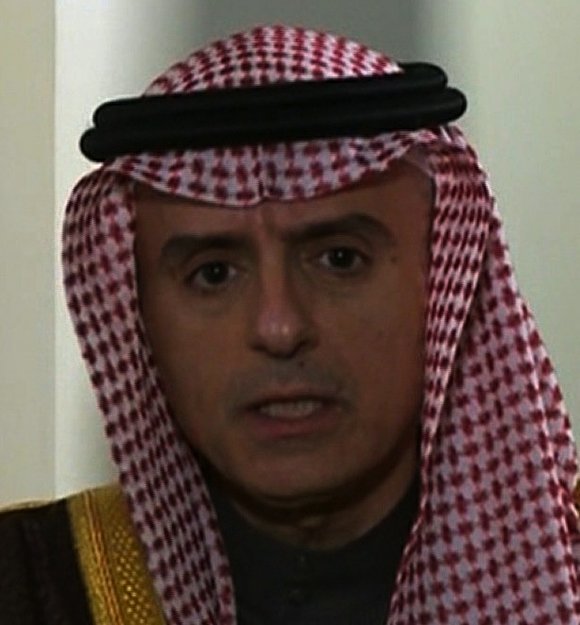 (CNN) -- In an interview with CNN's Wolf Blitzer on Tuesday, Saudi Arabia's foreign minister expressed cautious optimism about the Iran nuclear deal and defended his country's execution of a Shiite cleric beloved by Iran.

Tension between the countries has been pointed for a long time, but events lately -- including Nimr al-Nimr's execution -- have strained that relationship even further.

"Nimr al-Nimr is a terrorist, not a religious scholar," Adel al-Jubeir told Blitzer.

Speaking with some sarcasm, Jubeir added, "He's as much of a religious scholar as" Osama bin Laden was.

Nimr "recruited, justified, funded, equipped, plotted, and he engaged in terror attacks that left a number of security personnel dead."

Nimr was a fervent dissident against the Sunni Muslim Saudi royal family, and called for deposing them during the Arab Spring uprisings in 2011.

On the night Nimr was executed in Saudi Arabia, in predominantly Shia Iran, Molotov cocktails smashed into the Saudi embassy in Tehran. Protesters shouted as it caught fire. Some went inside and ransacked offices.

The next day, Jubeir said his country was severing ties with Iran.

Blitzer asked Jubeir about the Iran nuclear deal negotiated with the United States.

"You told me Saudi Arabia wouldn't rule out the possibility of acquiring a nuclear bomb?" Blitzer said.

The foreign minister answered by saying he wouldn't speak publicly about that.

"Saudi Arabia will do whatever it takes to protect the nation and people from any harm and I will leave it at that," he replied.

Asked about how his country felt about the Iran nuclear deal, he said there was "a lot of misinformation" concerning how Saudi Arabian officials felt about it.

He said Saudi Arabia is worried Iran "will support terrorism and instability in the region."

"The world is watching Iran for signs of change, hoping it will evolve from a rogue revolutionary state into a respectable member of the international community," he wrote. "But Iran, rather than confronting the isolation it has created for itself, opts to obscure its dangerous sectarian and expansionist policies, as well as its support for terrorism, by leveling unsubstantiated charges against the kKingdom of Saudi Arabia."

"Iran has supported violent extremist groups, including Hezbollah in Lebanon, the Houthis in Yemen and sectarian militias in Iraq," he said.

"Saudi Arabia will not allow Iran to undermine our security or the security of our allies," the piece read. "We will push back against attempts to do so."

Jubeir repeated those thoughts to Blitzer, saying, "This is about a country [Iran]" that has been aggressive and has demonstrated no inhibitions in using terrorism.

A double standard for beheadings?

Human Rights Watch and other groups have been highly critical of Saudi Arabia for its public beheadings of convicted people, including those who authorities say committed nonviolent crimes.

"We have the death penalty, so does the United States," Jubeir said.

The death penalty is "part of our legal system and people who commit crimes that lead to the death of innocents are punished," he said. "This is something the world has to respect."