Simone Biles Turning the Gymnastics World On Its Side 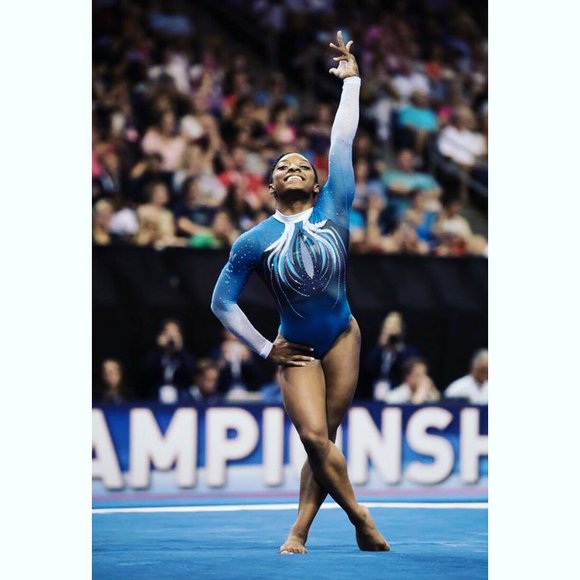 Mary Lou Retton, the Olympic gold medalist in the all-around in 1984, calls her the top gymnast in history. Nastia Liukin, the Olympic gold medalist in 2008, said she is a lock for the gold medal at the Rio Games. Who is the powerhouse of whom they speak? None other than nineteen-year-old, 4ft 8 in, half-pint, Simone Biles that is flipping the world of gymnastics on its side. Haven’t heard of her? Get to know the name. Come this August her name will be on everyone’s lips.

Biles holds several records and could easily be the most decorated gymnast in history. Currently racking up fourteen medals with ten of them being gold, Biles holds the record for most golds won by a female gymnast in the history of the World Champions. She is the first African American to be a world all-around champion and the only one – male or female – to have won the World Artistic Gymnastics Championships three years straight. Her most recent win of her fourth consecutive national titles in the all – around event at the U.S. women’s gymnastics has not been done by another woman in 42 years. And the best part of her story is that she has ties to our area.

Although not a native of Texas, Biles has planted her roots here. Coming to the Spring area when she was just six-years-old with her younger sister Adria when her grandfather and his wife adopted them. Biles and her sister know the pair as much more than grandparents but simply parents after her mother could not care for them. Biles has two older siblings who were adopted by her grandfather’s sister.

Her spark in gymnastics began after a simple field trip to Bannon’s Gymnastics. Upon her return home, Biles demanded to be enrolled and that was that. Her path would then cross with Aimee Boorman, Bannon gymnastics coach, who took particular interest in Biles’ natural ability. Boorman became Biles’ personal coach, surrogate mom, and all around supporter.

The more Biles trained, the more people took notice. She would next catch the eye of famed coached Martha Karolyi and begin training at her ranch in Huntsville, TX. The Karolyi Ranch is most famous for being the training grounds for the official U.S. women’s national team under the watchful eyes of Martha and her husband Bela. They have been dominate figures in U.S. gymnastics for decades. Biles was certainly in good stock. Her star has continued to shoot up from there.

Her announcement to go pro last summer has launched Biles into a marketer’s dream, especially with the Olympic games approaching. She has deals with Nike, Core Power, and GK Elite to name a few. Those are great perks but going pro did cost Biles to give up her scholarship at the University of California. But she knew she had to strike the iron while it was hot in her prime. She wanted to set herself up financially and then go back to college. She had already seen how Olympic Gymnastic sweetheart Gabby Douglas had racked up an estimated $10 million from endorsements and sponsors from her performances at last summer games.

In addition to endorsement deals, Biles is the face and inspiration behind her parents’ latest business venture. Ron and Nellie Biles opened a new state-of-the-art gym, the World Champions Centre, in Spring this past May. The gym is mainly for the community but Biles get her kicks in every now and then.