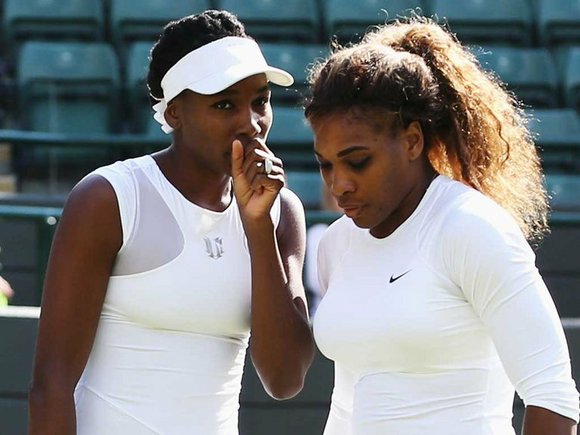 WIMBLEDON (CNN) -- Venus Williams could certainly lament "Why me?" and wonder "What if" after Sjogren's syndrome robbed her of some of the best years of her tennis life.

But instead she takes a matter-of-fact approach, perhaps the result of being one of the mature, elder stateswomen on the tour.

"I don't think about that because you can't change what happens," she told reporters. "It could have happened differently, but it didn't."

"This has been my life, what can I say?" she also said. "I wouldn't wish it any other way. It's been a beautiful life, a great experience. It's been everything."

What's transpiring now for Venus at Wimbledon is historic. When the 36-year-old beat the explosive, but inconsistent, Yaroslava Shvedova 7-6 (7-5) 6-2 on Tuesday, she became the oldest semifinalist at a grand slam since a 37-year-old Martina Navratilova at the All England Club in 1994.

Venus Williams may have never doubted she would feature in the latter stages of a grand slam again but, on the eve of this fortnight in southwest London, tennis onlookers -- with justification -- had different views. The last time Venus found herself in the last four at a major was at the 2010 U.S. Open.

A year later Williams was diagnosed with Sjogren's syndrome, an autoimmune disorder that can cause extreme fatigue and joint pain. There is no cure.

Williams altered her diet, becoming a vegan and staying away from sugar. The American has learned how to manage the illness but never quite knows when she'll wake up feeling unwell, significantly less than 100%.

"I haven't gone through what she's been through but just being around her, she doesn't talk about it and she does hide it if she's having a bad day," David Witt, a former men's pro who coaches her, told CNN.

"I can tell sometimes throughout the year when she wakes up and comes to practice, maybe she feels a little lethargic and tired and it's just one of those days that she fights through," Witt, in Venus' corner for 10 years, first mainly as a hitting partner, added.

"Maybe some of those days are some of the days through the year she didn't have her best performance and she lost and couldn't do what she wanted to do on the court, which is probably very frustrating for her because every time she steps on the court she expects herself to perform and win -- and if she doesn't win she's disappointed."

According to Witt, Venus' preparation for Wimbledon was ideal. They trained in particularly steamy, for this time of year, Florida, where he said the seven-time grand slam champion "was putting in the work, grinding on and off the court."

Still, Witt knows that recovery time after matches -- so pivotal -- is shorter for a 26-year-old than 36-year-old. He hopes Venus will be ready for Thursday's showdown.

"Obviously the older you get it's harder on the body," he said. "Your recovery time is the toughest. She can go out and play a hard-fought match and then it might take, I'm just throwing it out there, two days to recover instead of one day and you feel great. So she can still do it.

"She's in the semis now. It's going to be a tough match against Kerber. But how can you not give her a shot to win that? And you get to the final and it comes down to one match. If you play your best tennis, that's it, you win."

For much of the first set against Shvedova, who achieved a rare Golden Set at Wimbledon in 2012 against Sara Errani -- not losing a point -- the duo's power canceled each other out. The tussle turned, however, when the 96th-ranked Shvedova let slip a 5-2 lead in the tiebreak, unraveling in a flood of unforced errors.

There was no way back for the considerable underdog, and her foe was back in the final four and dreaming of a sixth Wimbledon singles crown -- which would match Serena's tally.

"Semifinals feels good," said Venus, 2-3 lifetime versus Kerber. "But it doesn't feel foreign at all, let's put it that way.

"The road was six years. They go by fast thankfully.

"The good part is I always felt I had the game. This is always a plus. So you just have to keep working until things fall into place."

Although the score in Kerber's quarterfinal suggested a tight contest, the German always appeared to be in control against Halep. She never trailed.

Serena Williams looked out of sorts in the second round against fellow American Christina McHale but has since won in straight sets, an ominous sign for Vesnina even if the world No. 1 unexpectedly lost in the semifinals at the 2015 U.S. Open and in the finals of this year's Australian Open and French Open.

The 21-time grand slam winner nabbed the final three games of the first set against former junior No. 1 Pavlyuchenkova -- they trained together in the off-season in 2012 -- won 90% of her first-serve points and didn't face a break point.

Vesnina's victory ensured that Cibulkova can get married as planned on Saturday, the day of the women's final. Had she won Tuesday, Cibulkova said she would have moved the date.

Both Vesnina and Cibulkova won 9-7 third-set thrillers Monday but Vesnina, like Shvedova a grand slam doubles champion, clearly had more left in the tank. Besides her marathon match, the Slovakian endured a long week prior to Wimbledon, claiming the title in Eastbourne.

"If I would be still here, I would just think about tennis," Cibulkova told reporters. "What I do, I do 100% percent. I will get married 100%, not thinking about tennis."

Venus and Serena, meanwhile, are still thinking about tennis at Wimbledon.