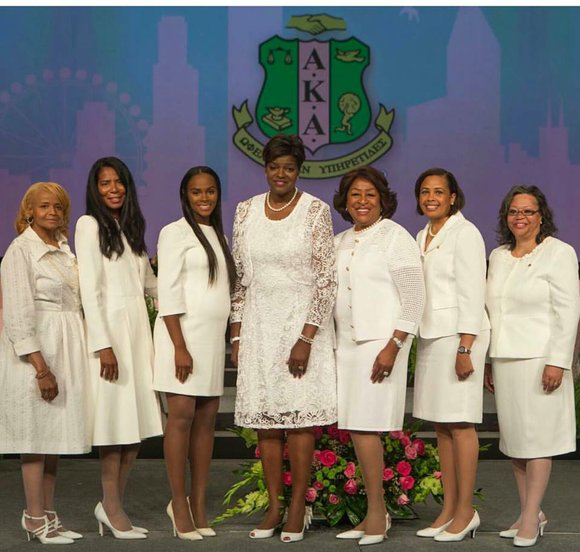 “Honorary Membership is bestowed upon women with high ethical standards who have received international recognition for outstanding achievement,” said Buckhanan Wilson. “Each of this year’s inductees have demonstrated remarkable strength and perseverance to achieve her goals and have a positive impact on the world around her. Most importantly, these women have done so with a commitment to serving others, a hallmark of Alpha Kappa Alpha.”

Mrs. Karen Eubanks Jackson is the Founder and CEO of Sisters Network, Incorporated, the nation’s only African-American 501c3 breast cancer survivorship organization. As a 23-year breast cancer survivor, Jackson is committed to focusing attention on the devastating effects breast cancer has in the African-American community. Her advocacy work has given her the opportunity to speak at the Center for Disease Control and to the National Congressional Black Caucus. She has been featured in numerous media outlets including the New York Times, WebMD and Essence Magazine and has received awards from the National Council of Negro Woman, Lifetime TV, and BET. She attended Morgan State University.

Ambassador Susan Denise Page is the Acting U.S. Ambassador to the African Union. For more than 20 years she has worked in numerous influential roles in Africa. Prior to her current appointment, Page served as the Senior Advisor in the Office of the U.S. Special Envoy for Sudan and South Sudan. She was a key member of the team that negotiated the 2005 Comprehensive Peace Agreement that ended the 22-year civil war between northern and southern Sudan. Most notably, Ambassador Page was America’s first Ambassador to South Sudan. She serves as a mentor for President Obama’s Young African Leaders Initiative and she is a graduate of the University of Michigan and Harvard Law School.

Attorney Judy A. Smith is a world-renowned crisis manager, communications executive, author and litigator. She has spent the last 25 years providing strategic advice to corporations, politicians, entertainers, sports figures and foreign governments. She is also Co-Executive Producer of and inspiration for the hit series Scandal. Prior to founding Smith & Company, Smith was NBC’s Sr. Vice President of Corporate Communications. She also served as the Special Assistant and Deputy Press Secretary to President George H.W. Bush. She is a graduate of Boston University and American University’s College of Law. Attorney Smith is a strong advocate for women and children known for opening doors for women of color, female attorneys, and youth of all ages.

Ms. Euphemia L. “Tika” Sumpter is an accomplished actress, singer and model. Currently, she is cast as “Candace Young” in the OWN drama series, Tyler Perry’s The Haves and the Have Nots. Sumpter’s first major role as an actress was in ABC’s daytime soap opera One Life to Live as “Layla Williamson”. She earned a NAACP Image Award nomination for her work on the show. Sumpter is formerly a member of the R&B group Twise. She serves as a celebrity mentor at the Black Girls Rock, Inc. camp and is a graduate of Marymount Manhattan College.

Rear Admiral Sylvia Trent-Adams is the Deputy Surgeon General of the United States. In this role she advises and supports the Surgeon General in communicating the best available scientific information to advance the health of the nation. As Chief Nurse Officer of the U.S. Public Health Service, Trent-Adams also advises the Office of the Surgeon General and the U.S. Department of Health and Human Services (HHS) on how to manage the Corps nurse professionals. In various positions in HHS, she worked to improve access to care for poor and underserved communities. She is a graduate of Hampton University (BS), the University of Maryland—Baltimore (MS), and the University of Maryland-Baltimore County (PhD).

“We are proud to welcome these five extraordinary women into our illustrious sisterhood,” said Buckhanan Wilson. “They epitomize the qualities that have enabled Alpha Kappa Alpha to thrive for 108 years. We know that they will be wonderful additions to the Sorority and look forward to their continued service to all mankind.”