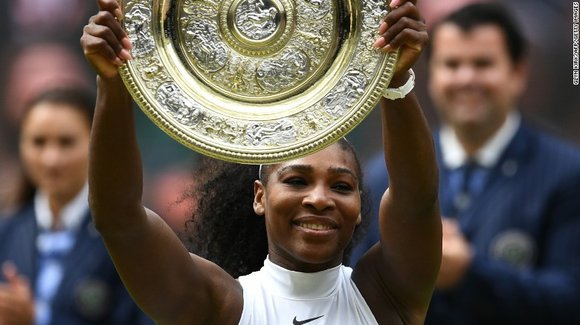 Deprived of a record-tying 22nd grand slam title in the Australian Open and French Open finals this year, Williams got to No. 22 Saturday by defeating a dogged Angelique Kerber 7-5 6-3 in a high-quality Wimbledon final.

It was the same Kerber who beat Williams in Melbourne in January but the world No. 1 turned the tables on the grass at the All England Club with a clinical display of power tennis amid windy conditions.

"I have definitely had some sleepless nights with a lot of stuff, coming so close and feeling it and not being able to get there," Williams, who was also foiled in her bid to achieve a calendar-year grand slam at last year's U.S. Open, told reporters.

"This tournament I came in with a different mindset. In Melbourne I thought I played well but Angelique played great, and better. So I knew going into this one I needed to be calm and be confident and play the tennis I've been playing for well over a decade."

She certainly did that.

The 34-year-old struck 39 winners. Williams only faced one break point, at 3-3 in the second, and saved it with one of her 13 aces.

"Of course it feels disappointing, that's for sure," Kerber, who finished with a respectable 12 winners and nine unforced errors, told reporters. "But also I know that I played a good final.

"I lost against a really strong Serena today. This makes it a little bit better, that I know that she won the match, not that I lost the match, because she played very well."

Williams and Kerber's fellow German Steffi Graf now tally 22 majors, the most in the Open Era of professional tennis. Talk now will surely center on the American attempting to get to Margaret Court's 24 grand slams, the all-time record. Court was in attendance Saturday.

Williams didn't want to dwell on the next step up the ladder, especially since she endured struggles to win her 18th major -- tying Chris Evert and Martina Navratilova -- and the 22nd.

"One thing I learned about last year is to enjoy the moment," said Williams. "I'm definitely going to enjoy this."

Her coach, Patrick Mouratoglou, sensed Williams was back to her best after they chatted on the phone following her loss to Garbine Muguruza at Roland Garros.

"If I'm totally honest, I'm not relieved to have gotten the 22nd one," Mouratoglou told reporters. "I'm relieved to have found back Serena. Everything depends on that. I don't look at the reward. I look at how to achieve it and there was clearly something missing in the last eight months and the thing that was missing was Serena.

"The tennis player was there but Serena as a person wasn't really herself. So she was beatable. Not to say that she was unbeatable before, but she was much more beatable."

Williams' reverse to Roberta Vinci in New York shook her to such an extent that, according to the Frenchman, she has only now truly steadied.

"Because so many things were underlined, the calendar slam, the 22nd, the fact that it was in New York, all those things together, this hurt her much too much and the other losses were a consequence of this one," said Mouratoglou.

"We didn't realize how much time she needed to recover from the (disappointment) of the loss at the U.S. Open. It took time. That's what I feel."

They'll agree on liking Saturday's result, which ensured that Williams' older sister Venus remains the lone player to down Serena twice in grand slam finals. Venus -- a loser to Kerber in the semifinals -- sat in the player box along with Beyonce and Jay Z. Later Saturday she combined with her sibling to capture the women's doubles crown.

The first point of the women's finale whetted the appetite: After a lengthy exchange, Kerber struck a winning forehand.

Superb entertainment ensued for fans on Centre Court and the millions watching around the world as Kerber attempted to neutralize Williams' potent shots.

Kerber saved three break points in her opening service game. She would often be scampering side to side in the match dealing with those Williams' drives.

Williams, a great mover like Kerber, took a slight tumble at 4-4 but was unhurt. At 5-5, 15-30, two unreturnable Williams serves got her out of trouble.

Just when it looked like a tiebreak beckoned, Kerber, fatally, made two unforced errors at 5-6, 15-all, both times in -- commendably -- attempting to hit aggressive shots to do some of the dictating herself from the baseline.

On a second set point Williams forced an error to grab a crucial one-set lead: Williams has never lost a final at a major when winning the first.

The fourth seed won what was arguably the point of the contest in the fourth game of the second when she crushed a backhand from well outside the doubles alley down the line.

At 3-3, not only did Williams produce the ace on break point but she hit another ace to earn a game point. Seeing that rare chance dissipate, Kerber was broken in the next game and Williams held to love to close out the one hour, 21-minute affair.

"Today when she's in trouble at 15-30, boom, boom, this is Serena," said Mouratoglou. "When she needs to lift her level to close it, this is Serena. I didn't see that for eight months."

After authoring a winning volley on match point, Williams fell backward onto the grass. Williams and Kerber then exchanged a long hug to cap an enthralling battle.

"I just said to her, 'Congrats,' and that she's a champion," said Kerber.

Indeed. And not just any champion.