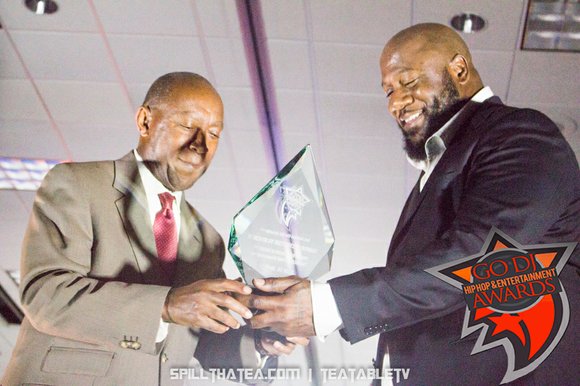 HOUSTON, Texas – More than three thousand die hard music fans attended the 3rd Annual Go DJ Awards in Houston on July 18 at the NRG Center where top honors were earned by hip hop veteran Paul Wall and Mayor Sylvester Turner. The always-epic event kicked off with an exclusive red carpet, featured electric performances and appearances by some of the biggest names in hip hop and helped to build bridges between the entertainment industry and local business and civic leaders.

In his acceptance speech, Houston Mayor Sylvester Turner encouraged attendees and award winners alike to do their part in lifting up the city and supporting each other. The awards show, which attracts music artists and celebrities from across the U.S.,aligns with the mayor’s efforts to establish the city as a major hub for music and entertainment.

The 3rd Annual Go DJ Awards was broadcasted live by 97.9 The Box and included a tribute to the legendary Prince and a performance of “Hate On” by Jhonni Blaze in support of the Black Lives Matter movement. Jaye Valentine and Jazz Anderson, daughter of VH1 “Basketball Wives” star Tami Roman, graced the awards show stage for the first time, along with many other up and coming artists. DJ XO lit the stage on fire with the performance of his smash hit, “I Just Pulled Off the Lot” to close the show.

The event was hosted by radio personality on the Mic and MC Kane. Go DJ GT served as the official DJ for the event. Numerous special guests made appearances at the event including Slim Thugg, Zero, Kirko Bangz.

Velma Trayham, the CEO of ThinkZILLA Consulting and the engineer of the awards show’s event management and massive publicity campaign, also received an award for outstanding achievement.

“The Go DJ Awards has become one of the most highly-anticipated annual events in Houston not only for music fans, but for business and civic leaders seeking to tap into the influence of the entertainment industry and reach an increasingly affluent urban demographic,” said Trayham.

“Over the past three years, the event has garnered millions of social media impressions. This year was no different, as the event trended across all social media platforms. It was a stellar show and next year will be even bigger and better.”