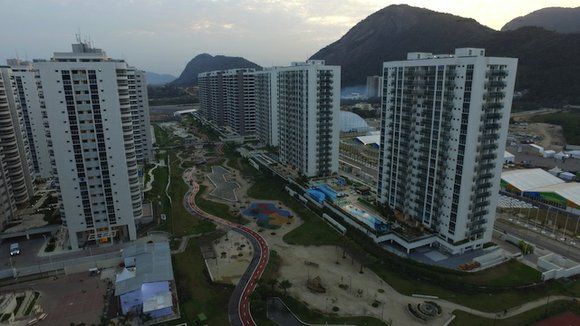 An inside look at Rio's Olympic Village

The village, comprised of 31 17-storey towers, opened its doors on Sunday, less than two weeks before the start of Rio's Summer Games on August 5. But the first day was marred by controversy.

"We felt that our building was not safe, because of a combination of plumbing and electrical issues," the Australian Chef de Mission Kitty Chiller told journalists, adding that a stress test had been carried out -- opening taps and turning on lights simultaneously -- and discovered "significant leakages."

"I have never experienced, this is my fifth Olympic games, a village in this state or lack of state of readiness in that point and time," Chiller said, adding the athletes would stay in hotels until the problems were fixed.

The Local Olympic Committee admitted there were some problems and said they would be addressed in the next few days.

"Every Olympic Village, because of its magnitude, needs some adjustments until it becomes perfect. The important thing is that everything will be resolved before the Games, without disturbing the athletes," president of Rio 2016's organizing committee Carlos Arthur Nuzman said in a statement.

The mayor of Rio de Janeiro appeared to make light of the situation, however, sparking what some media have called "Kangaroogate." At a receiving ceremony at the Village, he offered to get a kangaroo for the Australian Olympic Committee.

"We want them to feel at home here," Eduardo Paes said. "I almost feel like putting a kangaroo to jump up and down in front of their building."

Responding to Paes' offer, Australian committee spokesman Mike Tancred told a Brazilian newspaper "we do not need kangaroos, we need plumbers to account for the many puddles found in the apartments."

The Olympic Village will be home to 17,000 athletes and coaches during the Games.

The British Olympic Association acknowledged that while there were some "maintenance difficulties" with the village, the first Team Great Britain athletes will begin moving in on Tuesday.

"Some (countries) are comfortable for their teams to move in, and I envy them," said Chiller on Sunday. "We are reasonably confident we will be able to enter the village on Wednesday."

Numerous safety concerns have been raised ahead of the start of the 2016 Olympics on August 5, including the threat of international terrorism and high crime levels in the host city.

One foreign athlete living in Rio allegedly got a taste of that crime on Saturday.

New Zealand jiu jitsu athlete Jason Lee said on Facebook that he was "kidnapped" by armed men in military police uniforms and forced to withdraw cash from two separate ATMs.

Jiu jitsu is not an Olympic sport, so Lee is not competing in the Games, but the former national jiu jitsu champion has lived in Rio for almost a year.

"I was threatened with arrest if I did not get in their private car and accompany them to two ATMs to withdraw a large sum of money for a bribe," he said on Facebook.

"I'm not sure what's more depressing, the fact this stuff is happening to foreigners so close to the Olympic Games or the fact that Brazilians have to live in a society that enables this ... on a daily basis."

He told New Zealand's Fairfax Media that he "feared for his life" during the alleged incident. Lee's girlfriend, a reporter for Fairfax, said on Twitter that the pair had reported the incident to police.

Rio police could not immediately be reached for comment.