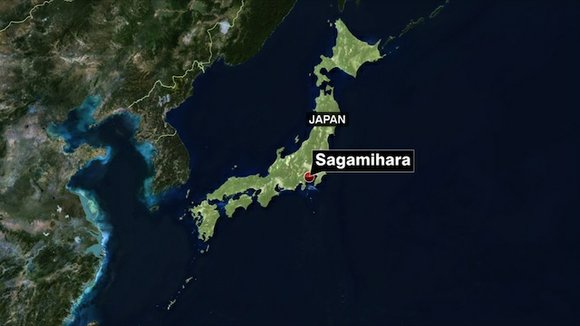 Japanese police have arrested a man in connection with a deadly stabbing spree at a facility for the disabled, west of Tokyo, according to Japanese state broadcaster NHK.

(CNN) -- At least 19 people were killed and 25 injured in a stabbing spree at a facility for disabled people west of Tokyo, making it one of Japan's deadliest mass killings since World War II.

Officer Satomi Kurihara of the Sagamihara Fire Department confirmed the death toll at the Tsukui Yamayurien facility in Sagamihara, a residential area approximately 40 kilometers (25 miles) west of the capital.

Satoshi Uematsu, a 26-year-old who worked at the facility until February, broke in through a window about 2 a.m. Tuesday (1 p.m. ET Monday), Kanagawa Prefecture officials said at a news conference.

Police said they received a call from an employee of the facility reporting the attack, according to state broadcaster NHK.

In a brief press conference, Japanese Chief Cabinet Secretary Yoshihide Suga confirmed that there was no terror link with ISIS.

He added that the government would analyze information from the city government and the police department, and that the Ministry of Health, Labor and Welfare would ensure this kind of incident does not happen again.

About 3 a.m., Uematsu turned himself in at the Sagamihara police station, carrying a bloodstained knife and cloth, officials said.

The 7.5-acre site is home to 149 residents, aged between 19 and 75, according to the Kanagawa prefectural website. Just under a third of the people living at the facility are elderly.

A total of 222 people work at the facility, but only nine were on the premises when the incident occurred.

In June 2001, eight children were killed when a former janitor entered an Ikeda elementary school in Osaka and began stabbing students at random.

In June 2008, a man ran over a group of people with his truck and then stabbed 18, killing seven, in Tokyo's famous Akihabara gaming district.

The biggest loss of life in Japan's recent history was in 1982, when 24 people died after a Japan Air Lines pilot crashed a flight into Tokyo Bay.

The last time Sagamihara made global headlines was in 2012 when Naoko Kikuchi, a member of the Japanese doomsday cult responsible for the 1995 nerve gas attack on the Tokyo subway, was arrested there. The attack killed 13 people and injured more than 5,500 people.

The cult, Aum Shinrikyo, was responsible for another sarin gas attack the previous year that killed seven people and sickened some 200 more.