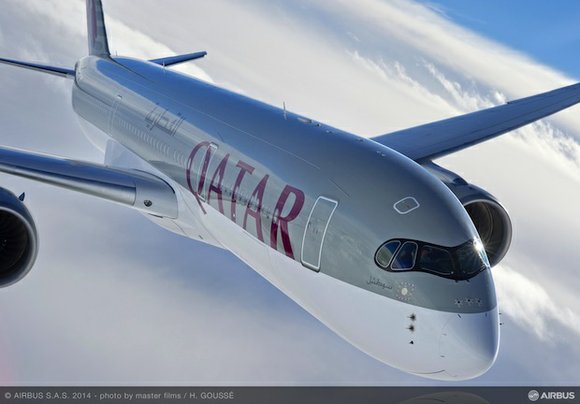 The world's busiest airport, Atlanta Hartsfield-Jackson International -- with seven concourses and more than 200 gates -- a gate for the Super Jumbo Airbus A380 could not be provided. That forced Qatar Airways passengers to deplane Wednesday via mobile stairs and shuttle buses.

ATLANTA (CNN) -- More than 500 passengers aboard the first Qatar Airways flight to Atlanta flew 7,400 miles from Doha, Qatar, without incident, but during the final few hundred yards of their journey they got caught up in an international dustup between airline heavyweights.

Here at the world's busiest airport -- with seven concourses and more than 200 gates -- a gate for the Super Jumbo Airbus A380 could not be provided. That forced Qatar Airways passengers to deplane Wednesday via mobile stairs and shuttle buses.

Atlanta's airport has only one gate that can accommodate the A380 -- the world's largest airliner. The airport and resident hub carrier Delta Air Lines said they could not make that gate available.

Hundreds of Qatar passengers were inconvenienced in Atlanta. Some wanted to know who to blame for not having a jetway where they could deplane. The airport and Delta blamed the airline for not giving enough notice that it was sending a Super Jumbo to an airport with only one gate that could handle such a big plane.

"It is a part of the common use lease agreement that we have," said airport spokesman Reese McCranie. "We have to be given a certain amount of time when there is an equipment swap."

Four to six Delta aircraft needed access to the A380 gate at the time the Qatar Airways plane requested access.

"... there wasn't anywhere Delta could put them," McCranie added.

Delta offered as a "solution" a scenario that included parking the A380 on a remote stand near the international terminal. "Despite limited time to solve for the request, Delta offered solutions to allow Qatar to use the gates while ensuring our own schedule remained accommodated during a heavy traffic period at the international terminal," Delta said in a written statement.

"Delta applies for accommodations months in advance," a Delta spokeswoman said. "Qatar did not do that when asking for the A380." The A380 was scheduled for the flight at least a month in advance, according to several widely published reports.

When asked if the airline gave enough notice to schedule access to the gate, Gunter Saurwein, Qatar Airways' senior vice president for the Americas, smiled and said, "in general yes, we gave some lead time that we would be here."

When asked if Delta may have deliberately prevented Qatar from using the gate, Sawrwein said, "I do not want to comment on that. We as an airline don't finger point."

The crew deplaned the double-decker jet's 517 passengers in 45 minutes, including some disabled travelers. Although that's much longer than it usually takes to deplane via a jetway, Sawrwein described it as a success under the circumstances.

Later, the outbound A380 flight experienced a two hour delay due to the same gate situation.

Using the Super Jumbo for this flight was a one-off for Qatar Airways' inaugural, making the gate dilemma unlikely to occur again on this route. Future Qatar Airways flights between Doha and Atlanta are scheduled to use Boeing 777-200LRs, which will have access to an airport gate and jetway.

U.S. carriers claim that Qatar Airways and other Persian Gulf airlines receive billions of dollars in subsidies and have done so for many years, if not decades. They also allege that government handouts to Gulf carriers have enabled the funding of new routes and new aircraft.

The feud between the two carriers escalated last March when Qatar Airways CEO Akbar Al Baker said he'd launched the Atlanta route "to rub salt into the wounds of Delta."