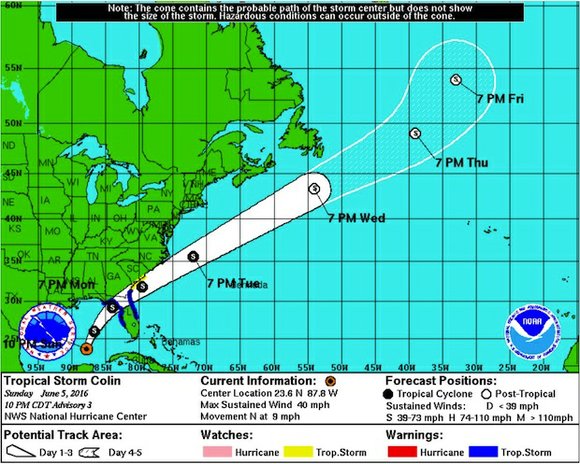 Path of Tropical Storm Colin on the Florida Coast

(CNN) -- Just days after the official start of hurricane season, a tropical storm is churning toward the Florida coast.

Officials warned that the cyclone -- which was about 315 miles (505 kilometers) southwest of Tampa, Florida, early Monday -- could cause heavy rains, coastal flooding and dangerous surf.

Colin is the third tropical storm to form this year in the Atlantic. It's the earliest that three named storms have hit the region, besting the previous record -- which was set in 1887 -- by about a week.

The storm has maximum sustained winds of 50 mph and is heading north-northeast at about 14 mph, forecasters said.

It's expected to pick up speed and could make landfall Monday, the hurricane center said.

That could be welcome news for some as the storm replenishes aquifers in the state that have been low on water, CNN meteorologist Tom Sater said.

"The combination of a storm surge and the tide will cause normally dry areas near the coast to be flooded by rising waters," the center said.

Tropical storm warnings are in effect from the Altamaha Sound in Georgia to the Sebastian Inlet in Florida and from Indian Pass, Florida, to Englewood, Florida

Hurricane season officially began June 1. But tropical systems can form during any month of the year.

Alex became a named storm on January 13, the first Atlantic hurricane to form in the month of January since 1938.

Does it mean anything to see storms forming so early?

"These first three storms have been very weak systems, even though Bonnie produced a lot of rain in South Carolina," Sater said. "This really means very little when it comes down to how this year may turn out."