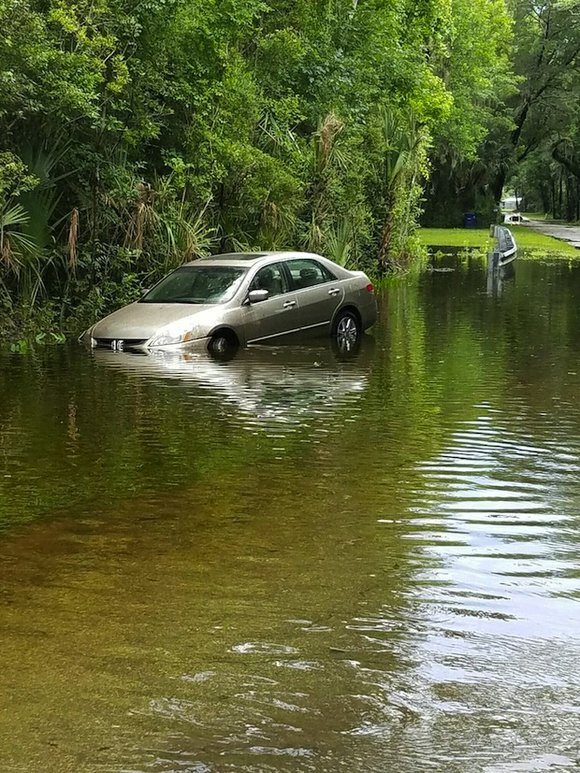 An image of a car that went into flooding waters in a closed road in Citurs County, Florida on June 7, 2016.

By Joe Sterling and Joshua Berlinger

And there could be more rough weather to come as the storm moves into the Atlantic Ocean, forecasters warned.

"This is a very quick-moving storm system, and a lot of the energy and a lot of the damage associated with it is going to be displaced off to the east," CNN meteorologist Pedram Javaheri said.

Colin's center is moving into the Atlantic east of the Georgia coast, according to the National Hurricane Center.

Storm will hug coast, head out to sea

It was packing maximum sustained winds of 50 mph and moving toward the northeast at 31 mph.

"The center of Colin should move near and parallel to the coast of the southeastern United States," the hurricane center said. "However, it's important to note that the strongest winds and heaviest rains are well removed from the center."

By Wednesday afternoon, forecasters said, the storm will be in the Atlantic. The hurricane center said it is expected to strengthen somewhat, but it will "lose its tropical cyclone characteristics" come nightfall.

"We're looking at another 24 hours of heavy rain from Florida to the coastal Carolinas before it heads out to sea," CNN senior meteorologist Taylor Ward said.

Tropical storm warnings are in effect for the Altamaha Sound in Georgia to the Oregon Inlet along North Carolina's Outer Banks.

Warnings along Florida's Gulf coast have been discontinued.

Making the best of it

As the storm started to roll in Monday, Cliff York and his family leaned over a wall at their beach hotel in Clearwater, Florida, to take in the scene.

It isn't what they had in mind when they left Vincennes, Indiana, for a Florida vacation.

"Sounds like the weather is better in Indiana than it is here," York joked. "Maybe we just should have stayed there."

But York said they'll still find a way to relax.

"We got two sunny days in Orlando," he said. "Now we have to make the best of what we can while we're here."

Dylan Fagan, who lives in Fleming Island, Florida, near Jacksonville, said the rain came out of nowhere and blew through really quickly. He picked up this children early from day care Monday as a precaution.

Colin is the third tropical storm to form this year in the Atlantic. It's the earliest that three named storms have hit the region, besting the previous record -- which was set in 1887 -- by about a week.

Hurricane season officially began June 1. But tropical systems can form during any month of the year.

Alex became a named storm on January 13, the first Atlantic hurricane to form in the month of January since 1938.

Does it mean anything to see storms forming so early?

"These first three storms have been very weak systems, even though Bonnie produced a lot of rain in South Carolina," CNN meteorologist Tom Sater said. "This really means very little when it comes down to how this year may turn out."