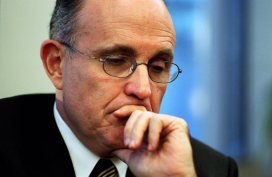 Appearing on CNN's "New Day," Giuliani sought to attach part of the blame for the Orlando massacre to Obama and presumptive Democratic presidential nominee Hillary Clinton, targeting their policies and a "feeling" created by their anti-terror rhetoric.

"I am very disturbed by the president's failure to use the word Islamic terrorism. I've been disturbed about it for years," Giuliani told CNN's Chris Cuomo.

"I believe that suspicious acts of terrorism weren't turned in in the days before the (Fort Hood) attack, and I was in San Bernardino around when it happened, so I'm not saying this from the back of my head. The words that the President uses are important."

The 2008 presidential candidate argued that Obama "is creating a feeling, particularly among more liberal members of society, that you can't say 'Islamic terrorism.'"

Cuomo suggested that Obama aversion to the term -- which Clinton said Monday she had no problem using, though she was concerned about "demonizing" Muslims -- was based on their argument that it gives ISIS ownership of the name of the religion and alienates the rest of the faith.

Giuliani replied that Clinton "only said it under pressure because of Donald Trump. She hasn't said it in years."

"It is their policies that brought us to where we are today," he said. "We are in a much more dangerous situation than we were before Obama and Hillary Clinton took over."