Lyrics from hip-hop royalty 2Pac, Missy Elliott and J. Cole to be featured on limited-edition Sprite packaging this summer 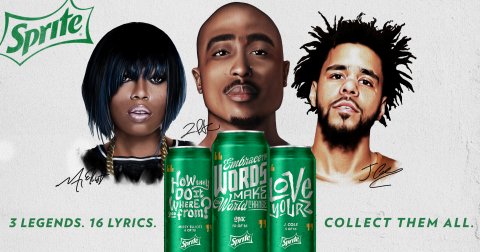 ATLANTA--(BUSINESS WIRE)--In hip-hop, authenticity is everything. Beats and rhymes move us, but true lyricism is what makes the music matter most. That’s why Sprite® is reintroducing its limited-edition Obey Your Verse Lyrical Collection, which will feature three new iconic artists and some of their most empowering lyrics on Sprite packaging this summer.

On the heels of last year’s successful program debut, the second edition of the Sprite Obey Your Verse Lyrical Collection features 16 inspirational lyrics from hip-hop royalty, 2Pac, Missy Elliott and J. Cole. The artists were chosen based on their reputation for remaining true to themselves through their music, storytelling and impact on culture.

“From the moment Sprite tapped into hip-hop culture 30 years ago with our ad featuring Kurtis Blow, the brand has strived to celebrate self-expression and provide artists with platforms to tell their most moving stories,” said Bobby Oliver, director, Sprite & Citrus Brands, Coca-Cola North America. “The Sprite Obey Your Verse Lyrical Collection is not only an acknowledgment of the genre’s best storytellers, but also a way of inspiring and empowering our fans to be true to themselves.”

Starting later this month, the 16 lyrics will appear on individual 12- and 16-ounce cans, 20-ounce bottles, and 12-, 20- and 24-packs of 12-ounce cans and be available in stores nationwide while supplies last.

The Sprite Obey Your Verse Lyrical Collection is a continuation of the Obey Your Thirst® campaign, which originated in 1994. As one of the first brands to acknowledge the cultural impact of hip-hop, Sprite has a history of featuring major hip-hop icons like A Tribe Called Quest, Pete Rock & C.L. Smooth, Grand Puba and Grandmaster Flash, as well as contemporary greats like Drake, Nas, Missy Elliott, Common and Fat Joe. The first edition of the Sprite Obey Your Verse Lyrical Collection featured lyrics by Drake, Nas, The Notorious B.I.G. and Rakim.

The second edition of the Sprite Obey Your Verse Lyrical Collection features the following lyrics:

“Keep ya head up” from “Keep Ya Head Up”

“If you fall, stand tall and come back for more” from “Keep Ya Head Up”

“The gift of speech, the power to reach” from “When We Ride”

“Embrace my words make the world change” from “Smile”

“How they do it where you from?” from “WTF (Where They From)”

“Cause the beat’s so cold” from “WTF (Where They From)”

“I won’t settle for less” from “Hot Boyz”

“Goodbye to the bottom, hello to the top” from “Grown Simba”

“You gotta dream like you never seen obstacles” from “The Autograph”