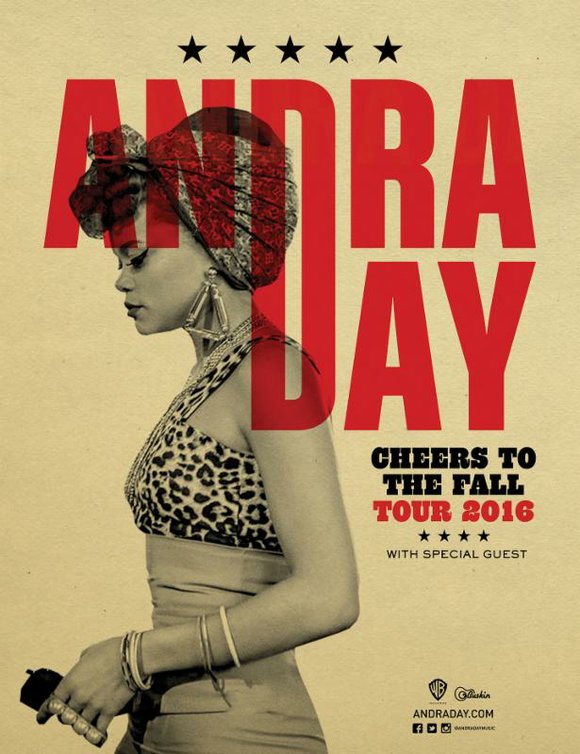 American-soul sensation Andra Day will embark on another headlining tour this fall with Citi.

Tour dates are as follows:

Hailing from San Diego, Day was nominated for two Grammys for "Best R&B Album" for her biographical debut Cheers To The Fall and "Best R&B Performance" for her stirring anthem "Rise Up". The single's reception has landed her on such shows as The View, Dancing with the Stars, The Late Show with Stephen Colbert, CBS Saturday Morning, the BET Awards, ESSENCE Music Festival, Special Olympics, Good Morning America, Jimmy Kimmel Live!, LIVE with Kelly & Michael, The Wendy Williams Show, The Real, CNN Heroes, Shining a Light: A Concert for Progress on Race in America, Macy's Thanksgiving Parade and the National Christmas Tree Lighting. Earlier this month, Day performed with for Hillary Clinton's "I'm With Her" concert in Los Angeles.

On June 3rd, the June cover-star of ESSENCE Magazine will take the main stage of the Mercedes Benz Superdome at this year's Essence Fest in New Orleans.

Day will perform at the second annual Sports Humanitarian of the Year Awards on July 12th at the Conga Room in Los Angeles. Presented by ESPN and hosted by Laila Ali, the event will celebrate and honor leagues, teams, individuals, and members of the sporting community that are using the power of sport to make a positive impact on society. Highlights of the evening will air during a 30-minute program to air on ESPN on July 15th at 7pm EST.

Earlier this week, the two-time Grammy-nominated singer gave a "magnificent, soulful" performance for a taping of Austin City Limits which included three standing ovations, including a dedication of her hit "Rise Up" to the victims and families of the Orlando club shooting. The full performance will air this fall on PBS.