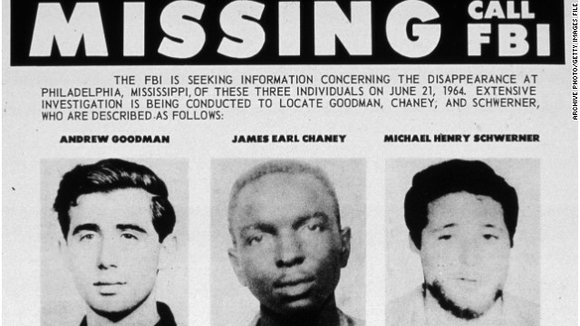 (CNN) -- Federal and Mississippi authorities closed the books on one of the most notorious cases of the civil rights era Monday, saying no viable prosecutions remain in the half-century-old investigation.

The decision means that no other suspects in the "Freedom Summer" murders of James Chaney, Andrew Goodman and Michael Schwerner in 1964 will be prosecuted.

The three men, all civil rights workers registering African-Americans to vote, were ambushed by a gang of Ku Klux Klan members that June night on a rural road. Their bodies were found 44 days later, buried in an earthen dam after an extensive FBI investigation.

"The Justice Department has investigated this case three times over 50 years and has helped convict nine individuals for their roles in this heinous crime," said Principal Deputy Assistant Attorney General Vanita Gupta, head of the Justice Department's Civil Rights Division.

The killings were among the most notorious of the civil rights era, and were the subject of the 1988 movie "Mississippi Burning."

On June 21,1964, Chaney, Goodman and Schwerner were on their way to investigate the burning of a black church in Neshoba County, Mississippi, when they were taken into custody for speeding by a sheriff deputy.

After they were released from county jail in Philadelphia, a KKK mob tailed their car, forced it off the road, and shot them to death.

At the time, no federal murder statutes existed, and the state never brought charges.

That year, however, the plot leader Edgar Ray Killen, a part-time Baptist minister, avoided prison in a trial in which the jury hung 11-1 for conviction. The lone holdout said she couldn't convict a preacher.

Killen was finally convicted in a 2005 trial -- at age 80 -- based on new evidence unveiled in 2000. The wheelchair-bound man was sent to prison.

At the time, Chaney's brother Ben said that despite the verdicts, "This is not over with. ... But we'll take what we got."

Schwerner's widow, Rita Bender, added after Killen's conviction: "I would hope that this case is just the beginning and not the end."

She acknowledged the fact that the case likely became a high-profile one because Schwerner and Goodman were white New Yorkers who came to the South the summer of 1964 with hundreds of other volunteers to register black voters. Chaney was a black man from Mississippi.

In 2010, federal authorities reopened the investigation in search of evidence to allow them to convict the remaining suspects.

Mississippi Attorney General Jim Hood said that investigation ran up against a stonewall 18 months ago when a witness backed out at the last minute after pledging to sign a sworn statement that would have implicated a suspect.

"It has been a thorough and complete investigation," Hood said Monday. "I am convinced that during the last 52 years, investigators have done everything possible under the law to find those responsible and hold them accountable; however, we have determined that there is no likelihood of any additional convictions."

Over the last 40 years, authorities have convicted people of notorious murders during the civil rights movement, including the Birmingham, Alabama church bombing in 1963 that killed four black girls and the assassination of Medgar Evers, a NAACP leader, in Jackson Mississippi in 1963 by a member of the White Citizens' Council, who was convicted more than 30 years later based on new evidence.

Recently, the Evers' family was back in the news when it showed split loyalties in the 2016 presidential election with his widow Myrlie Evers-Williams backing Hillary Clinton and his brother Charles Evers backing Donald Trump.