The Value Of Freedom 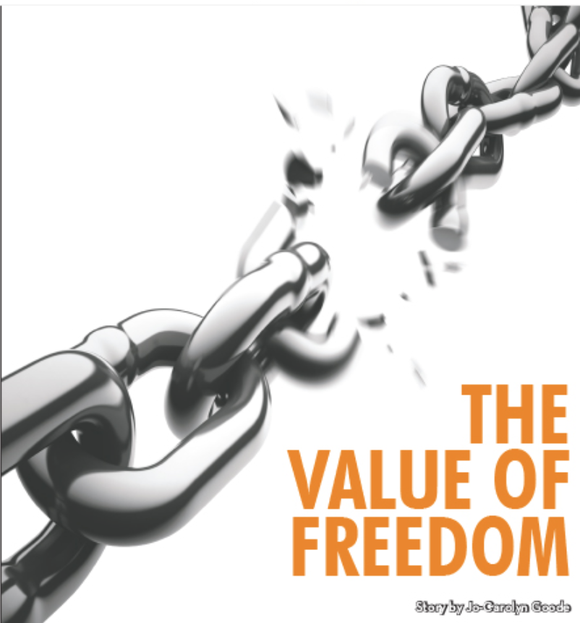 Freedom is something that we all have the right to simply because we were born. But it is also something none of us have. Not fully anyway. Allow me to explain.

According to the pure definition of the word, freedom is the quality or state of being as liberation from slavery or restraint or from the power of another.  Celebrations that occurred a week ago celebrated this very thought.  June 19th is the day that slaves in Texas received notification that they were no longer owned property but were free people. The bonds of slavery had been broken, and they had their freedom so they could do as they pleased. However, following that came another type of slavery with Jim Crow laws where the government used laws, policies, and unspoken rules to enslave Blacks and make them second-class citizens in this country. So were Blacks truly free?

Freedom also means the quality or state of being free, as in the quality of being frank, open or outspoken. We all know we are enslaved by our words. No, you say? The expression, “I could kill you,” use to be a lighthearted phrase, usually used in a joking way, to over exaggerate something. Now say that same phrase in a public setting, and you will get the side eye and some might even take cover around you. People won’t know if you are being funny or about to see how many lives you can take in 60 seconds. Our world has changed.

No one is a stranger to the words that Donald Trump has fired off. Offending people, countries and everyone else in between. As much as he says whatever he wants, he also is a slave by to his words because he sees how his words can hurt him in the broader scope.  After a few drops in the polls (which he will never admit to) and meetings with advisors he attempts to backtrack or “’rephrase” his thoughts. In essence, he is not truly free to say what he wants.

Freedom has taken on a broader meaning with the passage of time. Freedom is no longer black and white but there is a lot of gray. Freedom of choice. One would think having the choice to do what you want with your own body would be an easy freedom to have but it is not. I am not simply speaking about prochoice and prolife type issues. We don’t even have a choice in basic healthcare. Sure you may have insurance but you are restrained by the specific plan on what doctors are in network, what medicines are covered, and how much you have to pay.

Technology brought us into another kind of slavery. Turn in any direction and someone is on the phone, iPad or some kind of new technology. The cell phone is like an American Express card; can’t leave home without it. When people are getting fired because they can’t stay off their phone you know there is a problem because that is messing with your money. But it happens all the time.

Even the most powerful man in the world is not free. And yes, I am speaking of President Barack Obama. Throughout his presidency, there have been issues he would have like to resolve, bills he wanted to pass and actions he wanted to take. But he couldn’t, and he is the President. He is literally the man that signs the laws! However, he wasn’t free to do so.

If one really thinks about it, there is something that we all have to do each and every day. No one person is removed from that. I never viewed freedom in this matter until talking to one special lady, Joann Booth. As one of the more seasoned women in our city, she is prayed up and has lived and seen a lot. I asked her if she felt as if she were free. “There is no freedom. I think that it should be. But no, I don’t feel free,” said Ms. Booth, as she spoke about one of the things that she is enslaved to do. She has health challenges so there are specific treatments that are scheduled that she must take. “We are an enslaved society. Either you got to do this or you got to do that. It is always something that is a demand on you that you got to do. And sometimes you want to feel free to do what you want to do.  It is always something that you are a slave to so you don’t feel free. It is not a care free world anymore.”

Before my inbox is flooded with comments from this piece, please know that I know we have it good in the old USA. I am grateful for my ancestors that came before me that fought for the freedoms I enjoy with their blood, sweat, tears, and lives. Please understand I know life can be far worse in other parts of the world where women and minorities are treated as second-class citizens and it’s a crime to go against the government. I know life is far better in the US. I am grateful to our military men and women that put their lives on the line as they continue to battle for our right to be safe and secure. However, what I am saying is that as many freedoms as we gain, we put more restraints on ourselves taking away our own liberties. We must learn to accept each other's differences, treat each other respect, value all people and things and coexist to form a more perfect union.

This Independence Day, examine yourselves and the world around you. Ponder what freedom means to you. Loosen or even break the bonds of things that enslave you to truly grasp your full independence.