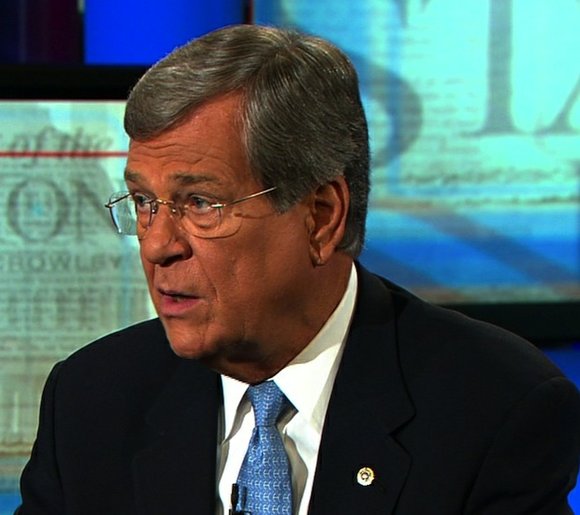 University of Chicago's Institute of Politics

The president has yet to name his pick, but current Senate Majority Leader Mitch McConnell has announced that he will not take up any nomination for the vacancy created by Scalia's death last month, arguing that it should be up to the next president to fill.

"I probably would've handled it differently," Lott told CNN senior political commentator David Axelrod on "The Axe Files" podcast, produced by CNN and the University of Chicago Institute of Politics. "My attitude, particularly on the Supreme Court, was that elections do have consequences, sometimes bad, and I tried to lean towards being supportive of the President's nominees, Democrat or Republican."

"If they were qualified by education, experience, and demeanor and had no other side problem, my predisposition was to be for them," added the Mississippi Republican, who led the Senate from 1996 to 2001.

Lott, now a prominent Washington lobbyist, qualified his comments by saying he understood McConnell's reluctance to entertain the nomination.

"The problem is in my opinion, and in the opinion of a lot of Republicans, and certainly in the opinion apparently of McConnell, so many of Obama's nominees have been so bad and so far left that the trust factor is not there," he said. "Was it wise to jump out there the way the Leader did? You know, time will tell."

"This is a very critical appointment," he noted. "This appointment could shift the balance of the Supreme Court from 5-4 one way to 5-4 the other way for years. And, you know, that is a problem."

Yet despite the GOP leadership's vow not to take up the nomination, Lott predicated that Senate Judiciary Committee chairman Chuck Grassley might be willing to hold confirmation hearings, depending on Obama's choice.

"If the president comes up with somebody that's credible and is a little bit more mainstream or moderate, I wouldn't be surprised to see Chuck give him a hearing," he said.

Lott, who supports Ohio Gov. John Kasich in the ongoing Republican primary, had harsh words for Kasich's opponents Donald Trump and Sens. Marco Rubio and Ted Cruz. Cruz, Lott noted, came to the Senate intending to run for president "and he's not prepared to be president," while Trump and Rubio "look like kids in a schoolyard fight."

"If I'd said some of the things that he's said, I'd have been run out of town on a rail," Lott said of Trump. "But every time he says some of those things, his numbers seem to go up."

To hear the whole interview with Lott, which also touched on his childhood in Mississippi, his cheerleading days at Ole Miss, the Strom Thurmond controversy, and much more, click on http://podcast.cnn.com. To get "The Axe Files" podcast every week, subscribe at http://itunes.com/theaxefiles.