Section of I-10 in Louisiana Closed by Flooding, Texas Diverts Eastbound Traffic 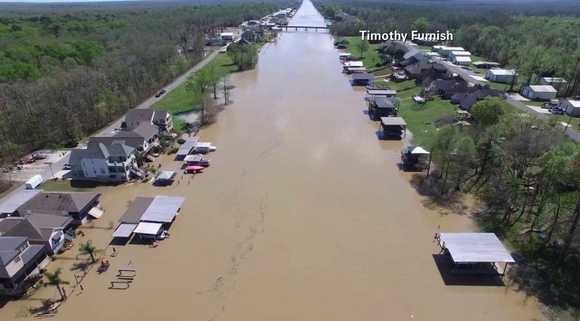 Residents in the French Settlement, Louisiana area are parking their vehicles along the main highways and using boats to go in and out to salvage whatever they can from their homes.

(CNN) -- Texas authorities diverted hundreds of vehicles off eastbound Interstate 10 in anticipation of closing the highway because of flooding near the state line with Louisiana, the emergency management office in Orange County, Texas, said Tuesday.

And the Louisiana Department of Transportation confirmed on its website Tuesday afternoon that westbound I-10 was in fact closed at the Sabine River, near the border with Texas.

The road was among the latest problems created by floods that have struck the Deep South. In Louisiana, rain and high water have damaged about 6,143 homes over the last few days, the state emergency preparedness office said Monday night.

Floodwaters threatened to send as many as 100 caskets floating down the Sabine River after cemeteries were inundated, Calcasieu Parish coroner's investigator Zeb Johnson told CNN. Surface vaults in older cemeteries are susceptible during major flooding because water gets underneath the vaults, causing them to float, or water gets inside the vaults causing caskets to dislodge concrete lids above them, Johnson said.

The vaults "become buoyant, like a boat and end up in the Sabine River or off in the woods somewhere," Johnson said The vaults can also turn upside down with the caskets still inside them, and Johnson and his team were securing one grave in particular. "It's the second time with this particular person, that we've had to go retrieve her," he said.

The Louisiana Governor's Office of Homeland Security and Emergency Preparedness tweeted earlier Tuesday that the interstate had already been shut down. A few hours later the agency sent an update saying I-10 would be closed later Tuesday.

Around noon Tuesday, Mike Steele from the Louisiana governor's office said: "There are no closures in the state of Louisiana of Interstate 10, either westbound or eastbound at this point. The issues are on the Texas side of the interstate."

The emergency management office in Orange County, Texas, told CNN: "We are currently diverting traffic off Interstate 10 to prepare for the eventual and likely shutdown of the interstate. Hundreds of cars are being diverted off the interstate."

The interstate runs through Orange County, and CNN affiliate KTRK-TV reported that a mandatory evacuation was in effect for that area.

The Louisiana Department of Transportation and Development said portions of Interstate 59 in south Louisiana and south Mississippi may also have to close because of rising water.

"We need the public's support now," said Kay W. Wilkins, chief executive of the Red Cross in Louisiana. "Entire families have lost their homes and everything they own to these floodwaters."

President Barack Obama declared on Sunday that a "major disaster" had struck the state. The initial federal declaration was for Bossier, Claiborne, Grant, Morehouse, Ouachita, Richland and Webster parishes, according to the emergency preparedness office.