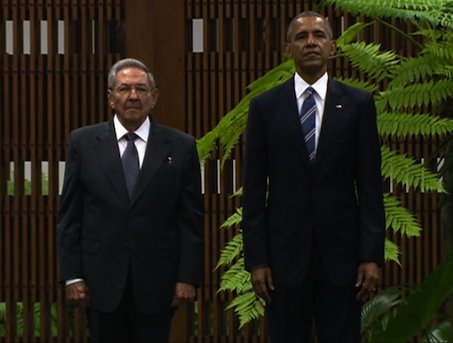 A day after making an historic arrival in Cuba, President Barack Obama met with lCuban leader Raul Castro as part of his efforts to elicit change on the island.

Though they both acknowledged deep disagreements on these issues, the two leaders found common ground on the topic of the economic embargo on Cuba, which both want lifted. Obama went so far as to declare that "the embargo's going to end," though he couldn't say when.

In an extraordinary sign of the shifting attitudes, Castro was willing to answer one question on why his regime was keeping Cubans incarcerated for expressing anti-government views. But his response only underscored the schisms between himself and Obama.

Unaccustomed to press conferences, Castro at first appeared confused at whether the question was directed to him and later asked for it to be repeated as he juggled the headphones he wore to hear its translation.

Later, Castro delivered a litany of areas where he said the U.S. was failing, from inadequate health care to lower pay for women. He ended the unprecedented question-and-answer session after a second inquiry on human rights, saying he'd said "enough."

Obama, meanwhile, appeared to relish putting Castro on the spot, winking at the assembled journalists when it appeared Castro wasn't going to answer his question.

"Excuse me?" Obama said to prompt the Cuban leader.

In his own message on human rights, Obama defended his decision to come to Cuba even as government dissent is punished.

"We have decades of profound differences," Obama said when asked what his message on human rights was during his "frank conversation" on the issue with Castro. "I told President Castro that we are moving forward and not looking backwards."

"We will continue to stand up for basic principles that we believe in," said Obama, who at points insisted that Castro answer the questions posed to him by American journalists. "America believes in democracy. We believe that freedom of speech, freedom of assembly, are not just American values but universal values."

Obama was speaking following an hours-long meeting with Castro at the Palace of the Revolution in Old Havana, his third meeting with the Cuban leader since work began to reopen diplomatic ties to the island.

Castro, making a statement before the reporters' questions, said that work toward improving economic conditions in his country was progressing. But he added that a longstanding trade embargo prevents a full restoration of ties.

"Much more could be done if the U.S. blockade could be lifted," Castro said. "The most recent measures adopted by his administration are positive but insufficient."

Obama agreed that the restrictions would eventually be removed, adding that, "The path that we're on will continue beyond my administration. The reason is logic."