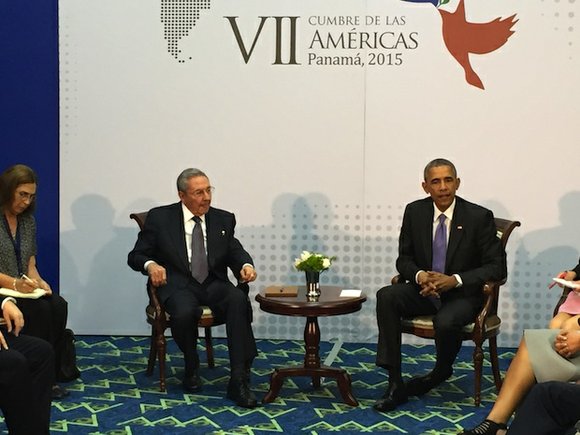 President Barack Obama met for an hour Saturday with his Cuban counterpart Raul Castro, the first time the two nations' top leaders have sat down for substantive talks in more than 50 years.

(CNN) -- "Sport is the conquest of the revolution," reads the sign looming over the outfield of Havana's Estadio Latinoamericano, the island's main stadium and hallowed ground for Cuban baseball fans.

There are no beer ads or Nike banners in the stadium, no advertising for anything but the Cuban revolution. Tickets cost a mere 15 cents. There aren't any beer sales either. Fans instead drink sugary cafecitos while smoking Cuban cigars.

The bare-bones stadium is the setting of one President Barack Obama's most anticipated events during his historic visit: taking in a baseball game between the Cuban National Team and the Tampa Bay Rays on Tuesday.

He'll observe the sporting event after a morning in which he gives a major address, to be televised on Cuban state-run TV, in which he will lay out the new U.S. policy on Cuba. Afterwards, he is scheduled to meet with Cuban dissidents.

While Cuban baseball players are world famous for their talent, Obama's visit comes as Cuba's favorite pastime struggles to survive a crippling spree of defections.

When Fidel Castro -- himself an avid baseball fan -- was president of Cuba, players faced a lifetime ban from the country if they left the island to play for huge sums in the U.S.

But Castro's younger brother and successor, Raul, has been more pragmatic when it comes to the island's national past time.

Even with the relaxation of some restrictions, though, the number of defections has surged.

According to Cuban officials, up to 150 players have left the island in the last year, many employing human smugglers and criminal gangs to flee to the U.S.

"It's not only the enticement of the money for these young players to leave, but also, they don't have the same status at home that they used to have," Baseball author Peter Bjarkamn told CNN. "The guys that used to be branded as traitors and still are to some degree by the government, for the fans these guys are the heroes."

Up until recently, Cubans almost had no way of following the careers of defectors after they left the island. Cuban state-run TV would not show American games where Cuban players competed and home Internet access remains a rarity.

But Cubans increasingly watch U.S. baseball games via thumb drives brought into the country and passed from fan to fan. Or they can see the latest scores at new public WiFi hotspots that have opened around the country.

Many Cuban fans complain that the level of play in Cuba doesn't compare to games in the U.S. and that, devastated by the defections, the Cuban National Team no longer dominates international competitions.