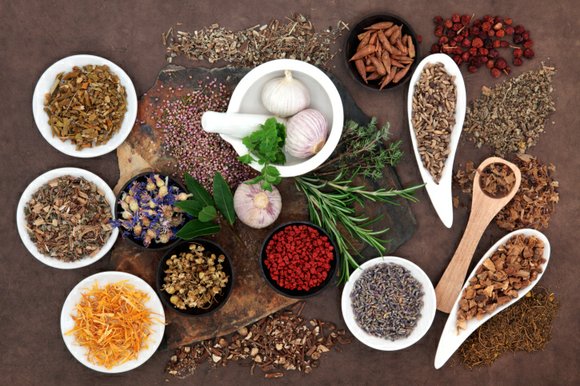 Multiple myeloma is a painful, incurable disease. The increasing amount of cancerous cells in the bone marrow as the cancer progresses is the root of backaches, nerve and muscle pains that many patients feel because of the disease. Also, multiple myeloma eventually causes damage to the bone, which can be another source of excruciating pain in patients. The pain may vary depending on the stage of the disease.

Whether the pain is short term or long lasting, patients don’t have to suffer while battling the blood cancer – which hurts twice as many African Americans than whites. There are quite a few options to treat the symptoms of multiple myeloma, including herbal therapy. Multiple myeloma’s symptoms of bone lesions, anemia and more can be treated with these herbs by adding them to meals or taking them with a liquid such as honey.

This perennial is native to tropical climates such as India and Southern Asia. But the ginger relative’s active ingredient is curcumin, which is said to have a sensitizing affect on multiple myeloma tumors. According to Livestrong.com, researchers believe that curcumin causes tumors to shrink or die, killing cancer cells in a laboratory dish.

Some herbalists say astragalus helps restore white blood cells, which are directly attacked by multiple myeloma. This herb has a history of medicinal use in traditional Chinese and Persian medicine.

While living with multiple myeloma, patients become susceptible to infections. These two herbs can be used to fight off infections. Goldenseal, herbalists say, is an antibacterial agent and digestion aid. It’s sometimes called orangeroot, and is a member of the buttercup family. You can find it in tablet or powder form.

Echinacea helps the immune system and is said to relieve the side effects of cancer. It’s in the daisy family, typically found in eastern and central North America.

Herbalists say this pepper helps any medications you take for multiple myeloma fight the disease even more because of capsaicin, the active, hot ingredient in cayenne.